Why Surgeons Amputated Child's Leg, Reattached It The Wrong Way

Doctors discovered a 10-centimeter tumor in the femur in her left leg -- and it had broken the bone, according to Birmingham Live. 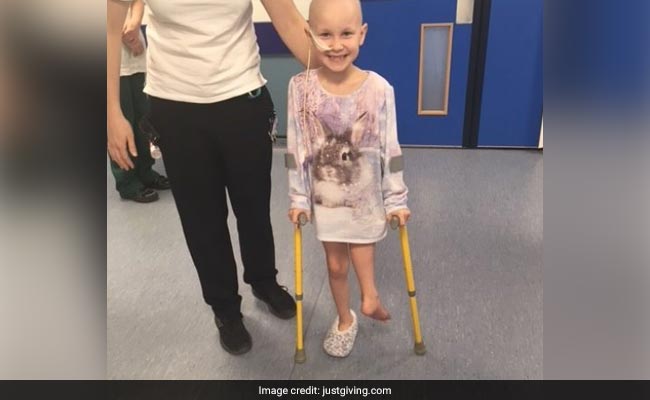 Not long before her 7th birthday, Amelia Eldred, a small dancer with big dreams of performing on stage, received a devastating diagnosis.

Doctors discovered a 10-centimeter tumor in the femur in her left leg -- and it had broken the bone, according to Birmingham Live. When it did not respond to chemotherapy, doctors told her parents that the limb would need to be amputated, but they had a solution to help the active child maintain her mobility, according to the British news site.

During a rare and complex medical procedure this year, surgeons in central England amputated Amelia's leg at the thigh, removed the central portion and then reattached the lower leg to the upper leg - backward. The young girl will eventually be able to use her ankle as a knee joint and simply fit her foot into a prosthetic so she can walk, run and dance once again, according to Birmingham Live.

Amelia, from Tamworth, a town in Staffordshire, not far from Birmingham, was diagnosed last year with a form of bone cancer called osteosarcoma, or osteogenic sarcoma, according to Birmingham Live.

Her mother, Michelle Eldred, told Birmingham Live that Amelia's leg "gave way" while she was playing last summer, and although her parents tried to nurse the injury, her limb continued to swell.

Eldred took her daughter to a nearby hospital, and was then sent to Birmingham Children's Hospital, where doctors confirmed the diagnosis, she said.

"I called my husband, Richard, and when they took us into a room with comfy chairs and tissues, I knew it was bad news," the mother told the news site.

Osteosarcoma, which is the most common type of bone cancer in children, typically affects the femur and tibia in the upper and lower leg and the humerus in the upper arm, according to St. Jude Children's Research Hospital. When treated early, the long-term survival rate is 70 to 75 percent, according to the children's hospital.

Such tumors can be treated with chemotherapy or surgery, such as rotationplasty - a procedure most commonly used to treat tumors in children in which the lower leg is turned 180 degrees, essentially turning the ankle into a knee.

In January, Amelia had the operation.

Prof. Lee Jeys, a surgeon who performed the procedure at Royal Orthopedic Hospital in Birmingham, said this week that before Amelia went into surgery, she bid farewell to the "loser" tumor.

"She was the perfect patient to have this procedure and even said 'goodbye loser' to the cancer as we prepared to amputate," he said in the statement.

"She has shown real bravery and confidence in showing off her leg, even though it looks a bit different. I'm glad that she'll be able to continue doing all the things a normal child can do including sports and dancing."

Amelia's mother could not immediately be reached for comment Thursday but told BBC News that the procedure was her daughter's best option.

"This way, she'll be able to then get a prosthetic leg," Eldred said, telling her 7-year-old daughter that she will be able to "do all the things you used to love to do and all your and all your sports and your dancing."

Family members and friends have started donating to a JustGiving page to help the child's parents keep her fitted with prosthetic activity blades.

In the end, Amelia's mother said she thinks her daughter's dream will come true.

"Amelia has always been an active child, she attended various clubs: Swimming, athletics at school, street dancing, ballet and tap, acrobatics and gymnastics. In addition she loves riding her bike and running. She dreams one day to return to dancing and perform on a stage," Eldred told Birmingham Live about her child. But Eldred added that since the surgery this year, Amelia has also developed some new dreams. "She talks of how her new leg will enable her to travel the world one day and maybe even enter the Paralympics."

"People ask how we cope, but we take our lead from Amelia, she has been so positive about all this," Eldred told the news site. "She has been so brave through all this -- just before her surgery she waved to her leg and said 'bye, bye tumor, see you loser!' After her surgery, one of the nurses overheard her say to another child: 'There's nothing wrong with being different.' "

(Except for the headline, this story has not been edited by NDTV staff and is published from a syndicated feed.)
Comments
Amelia Eldredtumor