The admission was a rare act of contrition from U.S. President Donald Trump's White House, where public apologies are few. 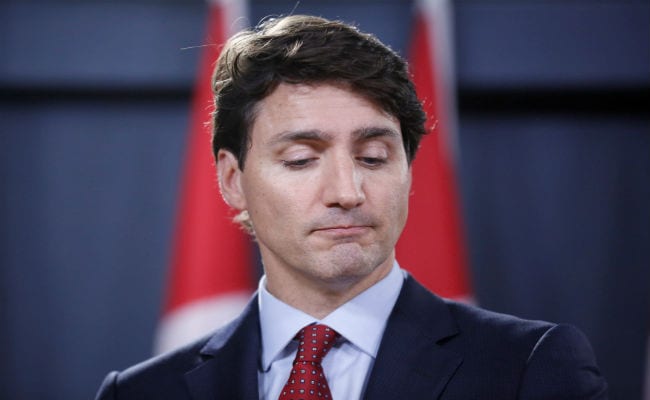 Canada reacted coolly to the apology, with Trudeau declining to answer whether he accepted it.

At an event hosted by the Journal, Navarro said he had made a mistake, according to the newspaper.

"My mission was to send a strong signal of strength," Navarro said at the event, according to the Journal. "The problem is that in conveying that message I used language that was inappropriate."

The admission was a rare act of contrition from U.S. President Donald Trump's White House, where public apologies are few.

Canada reacted coolly to the apology, with Trudeau declining to answer when reporters asked him whether he accepted it.

"We will continue to conduct our diplomacy the Canadian way, that is, being positive and constructive and firm in defending the interests of our industries ... in diplomacy it doesn't really matter about personal feelings and personal comments," said Trade Minister Francois-Philippe Champagne when asked about the apology.

Navarro condemned Trudeau following the Canadian leader's news conference after his summit meeting with Trump and other world leaders from the Group of Seven.

"There is a special place in hell for any leader that engages in bad-faith diplomacy with President Donald J. Trump and then tries to stab him in the back on the way out the door and that's what bad-faith Justin Trudeau did with that stunt press conference. That's what weak, dishonest Justin Trudeau did," Navarro said on the "Fox News Sunday" programme.

A day before, White House economic adviser Larry Kudlow had also lashed out at Trudeau.

Both aides accused Trudeau of betraying Trump, a Republican, at a news conference held after the U.S. president had departed Canada. That was when Trudeau said Canada would take retaliatory steps in response to steel and aluminium tariffs imposed by Trump on Canada and other allies.

Before the apology, some U.S. lawmakers on Tuesday questioned the strong language the White House and Trump have used towards Canada in contrast to the praise he gave North Korea at Tuesday's summit in Singapore.

Chris Coons, a Democrat on the Senate Foreign Relations, told MSNBC Trump had welcomed authoritarian leaders in other countries even as he "picks fights as he just did at the G7 with our longest, oldest closest allies: democracies, developed Western countries like Canada."

Promoted
Listen to the latest songs, only on JioSaavn.com
"If Kim Jong Un reverses his commitments ... then what the president said about Justin Trudeau will be repeated 10-fold about Kim Jong Un," Cotton told the Hugh Hewitt syndicated radio talk show.
© Thomson Reuters 2018