What Harvey Weinstein's Harsh New Life in Prison Will Look Like

Harvey Weinstein, 67, was found guilty Monday of first-degree criminal sexual act and third-degree rape. He faces a sentence of between five and 25 years on the first count 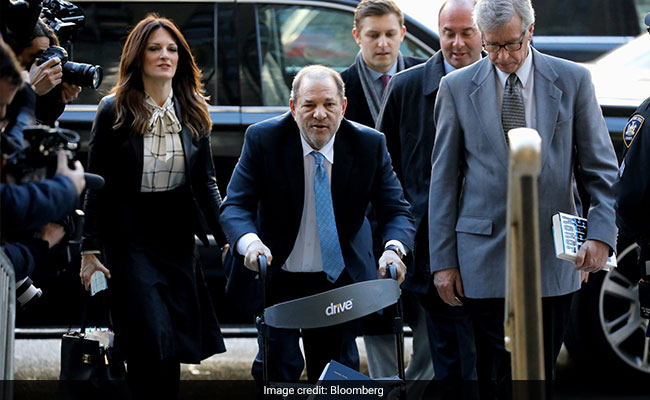 Harvey Weinstein, once one of the most powerful men in Hollywood, will likely spend the next several years in an 8-by-10-foot cell in upstate New York.

Weinstein, 67, who was found guilty Monday of first-degree criminal sexual act and third-degree rape, faces a sentence of between five and 25 years on the first count. Though the former movie mogul was acquitted on the most serious charge against him -- predatory sexual assault, which carried a possible life sentence -- any lengthy sentence could see a man of Weinstein's age spending the rest of his days in prison.

After the verdict was read, Weinstein was led away by two court officers with his hands shackled in front of him, to be held in custody until his March 11 sentencing.

Weinstein's time behind bars will be far from the glittering world he once inhabited. He will initially be held in New York's notorious Riker's Island jail complex, which has been targeted for closure by Mayor Bill de Blasio because of its violence and overcrowding. Once he's sentenced, Weinstein won't be going to a minimum-security "Club Fed" that lets inmates receive frequent visits from family and sometimes work outside the facility. Instead, he is likely to be classified as a violent offender, meaning he will be locked up in one of the state's tough maximum-security prisons.

Frank Perrone, a defense attorney and former Queens prosecutor, said Weinstein would probably be kept separate from the general prison population for his own protection.

"In prison individuals that are convicted of sexual crimes such as rape, their time is much harder than the guy selling drugs or burglarizing a house," said Perrone. "So here's someone who would probably need to have protective custody so they could ensure his safety."

If the state decides Weinstein needs protection, he may end up in the Clinton Correctional Facility, said Jennifer Scaife, executive director of the Correctional Association of New York, a nonprofit group that monitors state prisons. The maximum-security prison, located five hours north of New York City in the town of Dannemora, has a segregated unit for high-profile prisoners. It's perhaps best known for a daring 2015 escape by two inmates who were aided by a prison employee.

Weinstein is likely to spend most of his time alone in an 8-by-10-foot cell outfitted with a bed, toilet, sink and a bookcase for personal possessions, Scaife said. Under protective custody, he would still be allowed to work in the prison and participate in educational courses or counseling. If he ends up at Clinton, Weinstein would also likely have access to basic privileges like a television, a tablet, a commissary and a recreation yard, she said.

Former Tyco International Chief Executive Officer L. Dennis Kozlowski, who was convicted in 2005 of looting millions from his company, described life in his 12-man protective unit in a 2006 interview with Bloomberg at the medium-security Mid-State Correctional Facility in the upstate town of Marcy. Kozlowski was kept in his cell eight hours a day and earned $1 a day as a dining room attendant and teacher's aide.

Under maximum security, Weinstein would face an even stricter regimen than Kozlowski did, said Laura Brevetti, a former prosecutor who has also defended sex-crime cases.

The judge has a "bit of leeway" in sentencing because Weinstein has no prior criminal record, said Brevetti, but there's no way Weinstein is getting off lightly.

"Obviously for a person who's 68 years old, if you sentence him to 15 years that's pretty much equivalent to life as a practical matter," she said.

-- With assistance from Olivia Rockeman and Patricia Hurtado.