'We Will Give Him A Family': 6-Year-Old Boy Writes Obama About Refugee 'Brother' 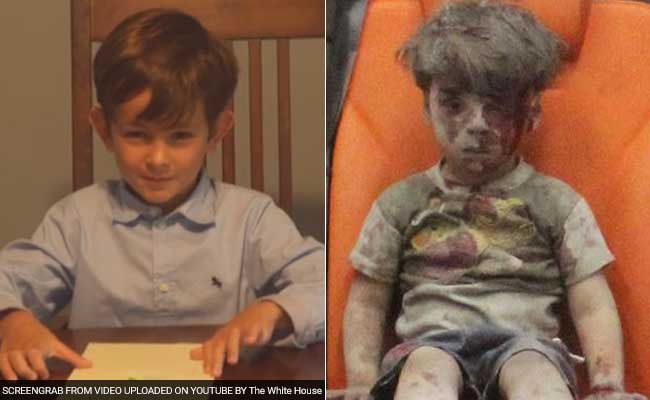 For many of us, the images of 5-year-old Omran Daqneesh, injured, ashen and bewildered after an airstrike in Aleppo last month, crystallized the horror of Syria's civil war. It made us wonder, again, how that horror might be stopped.

For Alex, a 6-year-old from Scarsdale, N.Y., it called upon an even deeper sense of responsibility and shared humanity.

In a letter to President Barack Obama, Alex wrote: "Remember the boy who was picked up by the ambulance in Syria? Can you please go get him and bring him to our home?"

"We will give him a family, and he will be our brother."

Obama was so moved by Alex's letter that he read it aloud at the United Nations summit on refugees earlier this week. The president also shared a video of Alex reading the letter on his Facebook page on Wednesday, where it has been shared more than 150,000 times and watched by 8 million people and counting.

Omran's 10-year-old brother, Ali, died of his injuries after the airstrike. An estimated 20 percent of the nearly half-million killed since the Syrian civil war began in 2011 were children. Of the country's 4.3 million refugees, at least half are children. Millions of Syrian children are not able to attend school. Millions have known nothing but war in their short lives.

The United States says it has taken in just over 10,000 Syrian refugees this year, bringing the total to just over 30,000. That number, and the number of refugees accepted into other wealthy countries in the Arab and Western worlds, pales in comparison to the number accepted in the countries abutting Syria. The vast majority of those who have fled Syria are in now living Turkey, Lebanon and Jordan.

At the refugee summit, Obama urged nations around the world to "welcome the stranger in our midst." He announced pledges made by 50 countries to take in an additional 360,000 refugees. Seven countries -- Romania, Portugal, Spain, Czech Republic, Italy, France and Luxembourg -- committed to resettle or admit at least 10 times more refugees than they did in 2015, according to U.S. officials cited by the AFP.

Canada and Germany have welcomed the most refugees per capita in the West so far. Eight countries, many of them already burdened with high poverty rates and violent conflicts of their own, are home to more than half of the world's refugees: Turkey, Pakistan, Lebanon, Iran, Ethiopia, Jordan, Kenya and Uganda. Six of the world's richest countries -- the United States, China, Japan, Britain, Germany and France -- hosted only 1.8 million refugees last year, or seven percent of the world total, according to research by the British charity Oxfam.

Public opinion in the United States is split, largely along party lines, on whether the country is obligated to take in more Syrian refugees. Republicans, and especially those who identify as supporters of GOP presidential nominee Donald Trump, argue that the United States has no obligation to take in more refugees. Democrats, as well as younger adults across party lines, tend to support taking in more refugees. A vast majority of Americans overestimate the number of refugees who've been arrested on terrorism charges since Sept. 11, 2001. As of this summer, three refugees have faced such charges in the United States. Only 14 percent of Americans polled guessed that the number would be that low.

Referring to Alex at the summit, Obama said: "He teaches us a lot. The humanity that a young child can display, who hasn't learned to be cynical, or suspicious, or fearful of other people, because of where they're from, or how they look, or how they pray. We can all learn from Alex."

Despite the long odds of Omran making it to the United States, Alex is looking forward to teaching him how to ride a bike, and to learning Arabic from him.

"Catherine, my little sister, will be collecting butterflies and fireflies for him," he wrote, in the ragged, determined handwriting of an inspired 6-year-old.