Facing global outrage over the attack, West Yorkshire Police announced Tuesday that they were investigating reports of "racially aggravated assault." 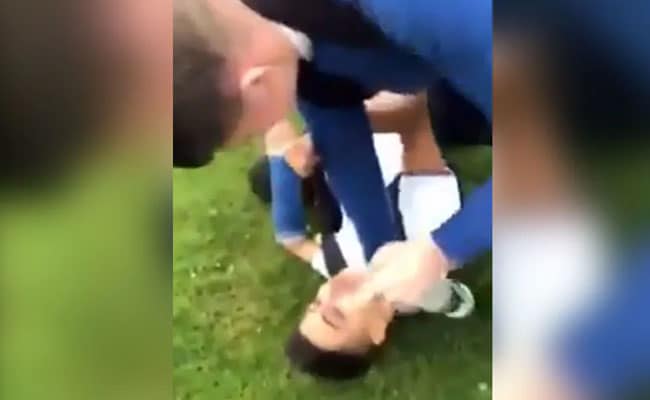 Police said Wednesday they had charged Jamal's attacker with assault.

On a school field in northern England last month, a group of boys closed in fast upon their target.

"Hey, Jamal, come here!" a teen in a blue sweater yelled as others strode beside him, one holding a phone aloft to record the pursuit.

A few yards ahead, Jamal kept walking, backpack strapped across his T-shirt and a cast around his arm. He had been injured a few days before in another incident at Almondbury Community School, according to police. He and his sister had been bullied repeatedly since fleeing the Syrian civil war and moving to West Yorkshire two years earlier, according to British news outlets, which did not fully identify the family.

Jamal was 15 - a year younger than the teen in the sweater, who walked fast to close the distance and swung a water bottle in his hand.

"What're you saying now then?" he called out to Jamal.

Jamal was not saying anything, but he stopped and turned.

The videographer adjusted his cellphone to get Jamal in the frame with his antagonist. A crowd of students formed a loose semicircle around them, most dressed in the Almondbury jacket uniform.

"What are you saying now then?" the teen in the sweater repeated, and this time he butted Jamal in the head as he said it.

The teen in the sweater grabbed Jamal's neck, twisted him around and pushed him to the grass.

I am absolutely disgusted and mortified by the level of hate and ignorance shown by the cowards in this video. It is of a Syrian refugee who has been bullied constantly in Almondbury High School where apparently...this hasn't been taken seriously. #Share#Justice@georgegallowaypic.twitter.com/WqPvqLuFBE

"What are you saying now then? Eh! Eh! Eh?" he screamed. But if there was an answer to the question, Jamal could no longer give it. The teen in the sweater had a hand around his throat and was pouring water from the bottle into Jamal's mouth.

"I'll drown ya, you little bastard, I'll drown you!" he shouted as Jamal coughed and sputtered.

He broke free and rolled away a second later. In the final scene of the video, whose publication on social media this week could very well change both teens' lives, Jamal stands up.

Students around him jeer and whoop and swish their ties, but he does not react. He simply rights himself and walks away, across the field and out of the frame - into a form of celebrity he never asked for.

"When I saw everyone looking at this video, I felt ashamed of myself and why it happened," Jamal told ITV on Wednesday, after footage of the October 25 incident made its way onto Twitter and Facebook, where it was viewed and shared hundreds of thousands of times. "I woke up and just started crying. They think I'm different. Different from them."

But where Jamal felt shame, others saw quiet dignity in his suffering and were inspired to do something about it.

Facing global outrage over the attack, West Yorkshire Police announced Tuesday that they were investigating reports of "racially aggravated assault." Police said Wednesday they had charged Jamal's attacker with assault.

"To the Syrian refugee - I say sorry. It's not the welcoming, friendly Britain we are supposed to be," Tobias Ellwood, a member of Parliament, wrote on Twitter, one of several politicians and celebrities who helped turn the 40-second video into a symbol of anti-immigrant hatred.

A local resident named Mohammed Tahir got in touch with Jamal's family and started a GoFundMe campaign for Jamal and his family and guardians on Tuesday.

Jamal "has been subject to months of bullying along with his little sister. To the point where his little sister has broken the lenses in her glasses and attempted to cut her own wrists in school toilets," Tahir wrote on the fundraising page, which a GoFundMe spokesman told The Washington Post is authentic. "Having left a war torn country, the least they deserve is to live in peace without being harassed."

The fundraiser raised more than $150,000 on its first day, and the amount continues to climb.

But there are things that money can't fix.

Jamal's hometown is Homs, ITV reported, which has been besieged and devastated for years in the Syrian war. He spent nearly half his life as a refugee in Lebanon before being resettled in 2016 by the British government in the town of Huddersfield, about midway between Manchester and Leeds.

Now, Jamal told ITV, his family may need to flee again. The bullying at Almondbury Community School has only increased since footage of the October attack went viral, he said, and has escalated into threats at his home.

After airing the interview, ITV played another video, recorded Tuesday at the school.

It showed a girl in a pink hijab being shoved between two students, then thrown onto the same field that Jamal had escaped a month earlier.

The girl was Jamal's little sister, the station reported. Police said they are investigating the incident.