"We Have To Make Him Perfect": Trump's "Dandruff" Diplomacy With Macron

From cheek kisses to shoulder rubs, the unusual friendship between the US and French leaders was on display Tuesday. 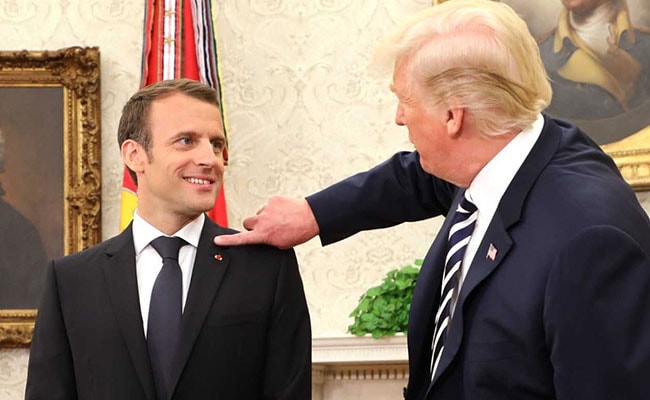 The two men French kissed (chastely). They shook hands and held hands and clasped hands. And they embraced and backslapped and shoulder-rubbed.

They were President Donald Trump and French President Emmanuel Macron, and on Tuesday, they became even more entangled in their grand histoire d'amour.

Macron's visit to the White House Tuesday followed a private dinner between the two leaders and their wives at Mount Vernon Monday night, and included a 21-gun salute, a joint news conference in the ornate East Room and a state dinner - the first one Trump has hosted as president.

But perhaps more importantly, the whirlwind, touchy-feely visit offered yet another glimpse into the Trump-Macron relationship, an unlikely friendship told through a series of phalangeal snapshots and freeze frames.

The copious public displays of affection also raised the question of whether Trump and Macron had finally embarked on a true transcontinental bromance or if the two men were merely partaking in an alpha game of one-upmanship.

The answer, said David Givens, director of the Center for Nonverbal Study, is a little of both.

"It's more of a playful dominance," Givens said. "The romance is there and they're just kind of fooling around, but it's real."

Their relationship began last May with a white-knuckled, jaw-clenching, six-Mississippi handshake in Brussels. In an interview with the Journal du Dimanche at the time, Macron described the physical standoff as "a moment of truth" and "not innocent."

"We need to show that we won't make small concessions, even symbolic ones, while not overhyping things either," Macron said.

Of course, Macron is a savvy politician who, as that initial handshake demonstrated, is also a careful student of Trump Macron stands to gain on issues from Iran to Syria if he can manipulate Trump, and his affection, to become the leading European power player at a time when Trump seems intent on upending the post-World War II global order.

Whatever the motivations, almost exactly a year later, NBC News dubbed the duo's personal chemistry "the art of the feel," and indeed on Tuesday, all the feels were on full display.
The physicality began almost immediately, as soon as Macron's limousine pulled up to the White House South Lawn and the men exchanged double-cheek kisses. 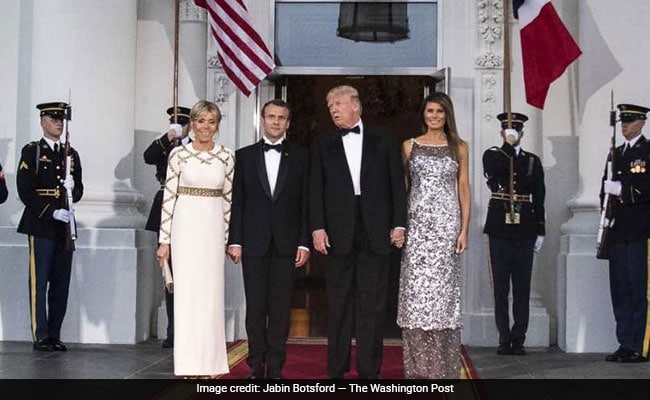 The leaders then reviewed the troops together, walking in near lockstep to appreciatively gaze upon the U.S. military, before retreating to the Truman Balcony, where they and their wives all clasped hands and held them triumphantly aloft.

Afterward, neither man seemed quite ready to head inside. Both waved at the crowd below, with one hand and then two. Macron flashed a thumbs up and patted his heart. Trump saluted and pointed. Finally, they almost simultaneously draped their arms upon the other's back, as if to ensure that they would exit stage center in unison, with neither soaking up a second more spotlight than the other.

Like nearly all formulaic bromances, the women - in this case, Trump's wife, Melania, and Macron's wife, Brigitte - were relegated to near-silent supporting roles, to be gazed upon but not really heard.

Nonetheless, Melania Trump made the most of her nonspeaking cameos, cutting a resplendent silhouette against the overcast sky. She donned a sleek, solidly white Michael Kors suit and a striking white hat, and seemed to channel Olivia Pope, the heroine of ABC's political drama "Scandal."

Outside in the Rose Garden, back in the Oval Office, and later during their joint news conference, Trump and Macron continued to find ways to touch.

At one point, along the East Colonnade, Trump reached behind him for Macron and the two joined outstretched hands - a scene that in still photographs seems to capture the graceful agility of two ballerinas rather than two besuited geopolitical allies engaged in a physical and emotional tug-of-war.

In the news conference, Macron sometimes touched Trump's arm as he spoke. And when the French president finished his prepared remarks, the leaders shook hands, then clasped hands, and then patted hands, before pulling one another close for another partial hug. Then it was time for yet another cheek kiss, as well as a "This guy!" finger-gun point at Macron from Trump's left hand.

At around 3:30 p.m., the president's banner picture on his Twitter account changed to a panamora scene from the morning where their arms seemed to brush ever so slightly.

There were also moments of clear power dynamics, as when Trump, in the Oval Office, turned to Macron and said that, in a sign of their "very special relationship," he was even willing to brush something from his suit.

"In fact, I'll get that little piece of dandruff off," Trump said, using a finger to briskly swipe at Macron's suit. "We have to make him perfect. He is perfect."

The interactions throughout the visit, said Patti Wood, a body language expert and author of "SNAP: Making the Most of First Impressions, Body Language, and Charisma," largely fall under a category known as "gamesmanship."

In calling out Macron's alleged dandruff, she said, Trump "did something called primate grooming."

"It said, 'We have an intimate relationship, but I'm dominant, I'm the alpha gorilla, I'm going to groom you,'" Wood said. "'But I'm going to criticize you by saying you have dandruff and I'm going to do that on the world stage and see how you handle that."

The day-long lovefest was striking for another reason, as well. For biases both political and cultural, Republicans for years have leveled the word "French" as something of an effete put-down - an insult hurled at John Kerry during his failed presidential bid and a brief, post-9/11 name change of "French Fries" to "Freedom Fries" in the House cafeteria.

As Tuesday's news conference wrapped up, the two men, as if propelled almost by sheer muscle memory, offered up yet another robust handshake.

Promoted
Listen to the latest songs, only on JioSaavn.com
Then, as they turned to leave, Macron slapped Trump's back, then eased his hand over to the U.S. president's right shoulder for a final long squeeze as the pair headed back into the West Wing.

(Except for the headline, this story has not been edited by NDTV staff and is published from a syndicated feed.)
Comments
Donald TrumpEmmanual Macron