French President Emmanuel Macron and his wife, Brigitte, will be the guests of honor at the dinner in the State Dining Room. 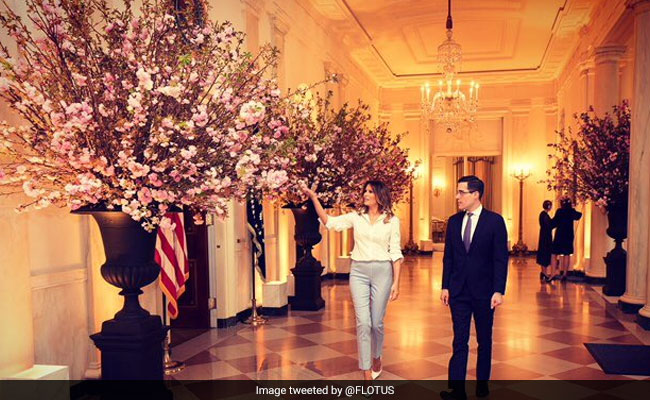 French President Emmanuel Macron and his wife, Brigitte, will be the guests of honor at the dinner

Washington: US President Donald Trump and First Lady Melania Trump hold their first state dinner on Tuesday, hosting the leader of America's oldest ally for a glittering event at the White House.

French President Emmanuel Macron and his wife, Brigitte, will be the guests of honor at the dinner in the State Dining Room.

The First Lady and her staff have spent months preparing for the event and the White House released pictures and a 38-second video of Melania Trump overseeing the details.

.@FLOTUS has selected the dinner setting and décor for the Trump Administration's first State Visit to pay homage to the long-standing friendship between the United States and France. pic.twitter.com/vqZVxxJE3u

The Republican is the first president in more than 100 years not to hold a state dinner during the first year of his administration.

More than 100 guests are expected to attend. The official guest list will be released shortly before the event.

The White House said the color scheme for the dinner is cream and gold and food will be served on china from the presidencies of Bill Clinton and George W. Bush.

The Cross Hall of the White House will be decorated with more than 1,200 cherry blossom branches, while the dining room will feature white sweet peas and white lilacs.

Spent yesterday with my team checking on the final details of our first State Dinner with France. pic.twitter.com/vHoQ1rTA3s

Entertainment will be provided by the Washington National Opera.

The White House said it will showcase "the best of America's cuisines and traditions, with nuances of French influences."

The opening course will be greens from the White House kitchen garden first planted by former First Lady Michelle Obama.

The main course will be a rack of spring lamb and rice jambalaya cooked in a New Orleans tradition.

Dessert will be a nectarine tart and creme fraiche ice cream.

Promoted
Listen to the latest songs, only on JioSaavn.com
Wines will come from both the United States and France -- a Domaine Serene Chardonnay "Evenstad Reserve" 2015 and a Domaine Drouhin Pinot Noir "Laurene" 2014.

The United States last held a state dinner for a French president in 2014, when Francois Hollande was hosted by president Barack Obama and First Lady Michelle Obama.

SpaceX Tourists Talk To Tom Cruise From Orbit, Give Update On Flight