Many members of the official delegation were left hanging but fortunately, did not fall to the ground. 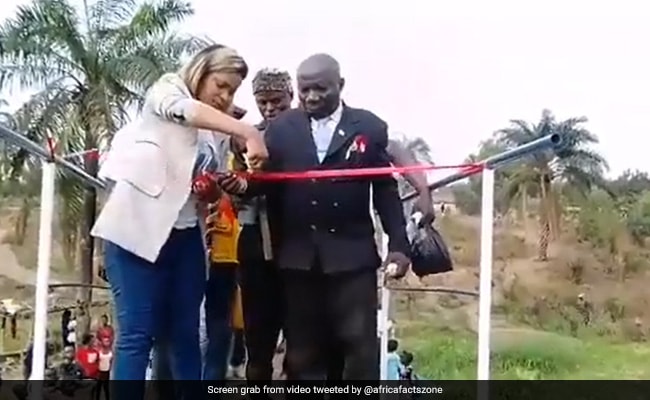 The bridge collapsed immediately after an official cut the ribbon to inaugurate it.

A bridge in Democratic Republic of Congo (DRC) collapsed as officials gathered to inaugurate it, according to local Khaama Press news agency. Videos of the accident are circulating on social media where people are mocking the construction quality. The small bridge was built to help locals cross a river during the rainy season. The temporary structure that was there before the bridge used to break frequently, the news agency said in its report.

One of the videos shows officials standing on the bridge to formally inaugurate it during an official event. The inauguration would have been complete with the cutting of a red ribbon tied at one end of the bridge.

But as soon as one of the delegates - a woman - took out scissors to cut the ribbon, the bridge succumbed to the pressure of the officials.

The video shows that the female official seeking help and ready to jump to safety.

The security personnel immediately rush to the spot and drag the woman from the falling bridge.

The rest of the members of the official delegation were left hanging but fortunately, did not fall to the ground. Others are immediately seen rushing to help the stranded officials.

The incident took place last week, according to iHarare. The bridge collapsed and broke into two.

"Don't be surprised if the cost of this bridge is more than a million dollars of taxpayers money," a user tweeted.

"It's like the ribbon was the one holding the bridge together," said another.