African-American mayor piqued the ire of the very movement she was supporting, as well as of President Donald Trump. 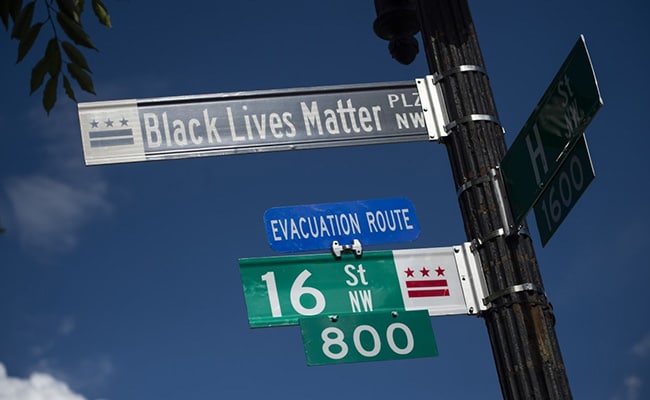 Washington mayor has renamed an area near the White House to Black Lives Matter.

Washington mayor Muriel Bowser on Friday renamed an area near the White House that has become the epicenter of anti-racism protests over the past week "Black Lives Matter Plaza" -- unveiling a giant street mural.

But in so doing, the African-American mayor piqued the ire of the very movement she was supporting, as well as of President Donald Trump.

The protests are focused on the May 25 death in Minneapolis of 46-year-old black man George Floyd while in police custody. A white officer kneeled on his neck until he lost consciousness.

That officer and three others are now in custody and facing charges -- second-degree murder for the kneeling officer, and aiding and abetting that crime for his colleagues.

Just north of the White House, the words BLACK LIVES MATTER were painted in huge yellow letters along the street leading to the presidential mansion, along with the symbol from the DC flag.

The section of 16th street in front of the White House is now officially "Black Lives Matter Plaza". pic.twitter.com/bbJgAYE35b

"The section of 16th street in front of the White House is now officially 'Black Lives Matter Plaza'," Bowser tweeted.

A city worker put up a new street sign with the name.

"Determination to make America the land it ought to be," she said on Twitter.

The corner of 16th and H is significant -- in a controversial incident on Monday, peaceful protesters gathered there were dispersed with tear gas.

Shortly afterwards, Trump walked from the White House to a nearby church for a photo op, during which he held the Bible in his hand.

"There was a dispute this week about whose street this is. Mayor Bowser wanted to make it abundantly clear that this is DC's street and to honor demonstrators" who protested on Monday, her chief of staff John Falcicchio tweeted.

Rose Jaffe, one of the artists in the collective that painted the BLACK LIVES MATTER sign, told AFP it was "about reclaiming the streets of DC."

But she added that Bowser "has to do more than just a photo-op -- she must carry on when this is washed away" on issues like police accountability.

Stars Like LeBron James praised her move on Twitter, but the local chapter of the Black Lives Movement balked, calling the mural a "performative distraction from real policy changes."

"This is to appease white liberals while ignoring our demands," it said on Twitter, saying Bowser had "consistently been on the wrong side" of the movement.

'We are well equipped'

The US government deployed a significant contingent of federal officers and National Guard troops from other states -- many of them not wearing any identifying garb or badges -- to handle protests in Washington.

Bowser had called up the local Guardsmen but the Justice Department moved to take partial control of peacekeeping, with Guard troops from as far away as Utah brought in.

In a letter to Trump dated Thursday and tweeted early Friday, Bowser called for "all extraordinary federal law enforcement and military presence" to be removed.

She said their deployment was "inflaming demonstrators and adding to the grievances of those who, by and large, are peacefully protesting for change and for reforms to the racist and broken systems that are killing black Americans."

"These additional, unidentified units are operating outside of established chains of command," she added.

"We are well equipped to handle large demonstrations and First Amendment activities," including the right to assemble, Bowser said.

Trump reiterated on Friday that authorities need to "dominate the streets," and has been unapologetic about the deployment of forces.

And on Twitter, he lashed out at Bowser, calling her "incompetent" and saying the National Guard had saved her from "great embarrassment."

She replied: "DC residents cannot pay their hotel bills. The Army can clear that up with the hotel today, and we are willing to help."