The emergency meeting on NATO was called by the alliances Secretary General Jens Stoltenberg to discuss Russias invasion of Ukraine. 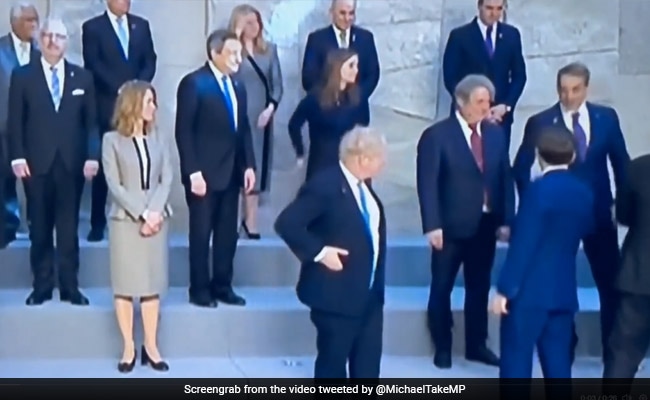 The photo of the NATO summit going viral on social media platforms.

Boris Johnson, the Prime Minister of the United Kingdom, was mocked on Twitter on Thursday after a video emerged showing him standing alone at a gathering of the leader of North Atlantic Treaty Organisaton or NATO. The clip shows Johnson standing awkwardly alone as European Union (EU) leaders shake hands with each other. However, a longer video that was posted on social media later showed the UK Prime Minister engaging with light conversation with French President Emmanuel Macron and shaking hand with him.

A Twitter meltdown began after the short clip showed Macron and other EU leaders greeting each other cheerfully before a NATO family photo and Johnson looking on with his hands in his pockets.

Our British Lion ????
Boris Johnson loved by #Ukraine️ & universally recognised as leader of the free world stands proudly in front of other leaders at The NATO Summit.
He doesn't join in with trivial chit chat
He is on a mission to defeat Russia.
Hero????????????pic.twitter.com/wDR7lPrjRZ

Macron is seen just a short distance away from Johnson and shaking hands with leaders around him as the UK Prime Minister waits for a greeting from him in the 26-second clip.

“Mr Lonely,” said a Twitter user. “I loved his wave at the end when the hospitality trolley arrived with the sausage rolls,” added another.

Some users also called the UK an “embarrassment” and that image of a “global Britain” in the eyes of the world leaders.

The short video became the talking point on Twitter due previous reports about the comments made by both Mr Johnson and Mr Macron against each other. In September last year, Mr Johnson told Mr Macron to “get a grip” over cancellation of a defence deal due to a pact between the UK, US and Australia. Then in December, Macron, according to a report in The Guardian, privately called Mr Johnson a “clown”.

But a few hours later, the full video of the NATO gathering was posted by Forbes and other publications, which showed the UK Prime Minister speaking to other EU leaders and greeting US President Joe Biden. He even shook hands with the French Prime Minister.

“Show the whole video and then we'll see who's having an awkward moment,” a Twitter user said, posting the full clip.

Show the whole video and then we'll see who's having an awkward moment.https://t.co/HpTYxATWTG

The “undoctored version” of the clip was also posted widely by social media users, who said the truth has been revealed. The UK's relations with a number of EU members have been frayed since the Brexit referendum of 2016.

The emergency meeting on NATO was called by the alliance's Secretary General Jens Stoltenberg to discuss Russia's invasion of Ukraine. After the meeting in Brussels, the leaders agreed to beef up their eastern flank in the face of the war waged by Russia in Ukraine, and warned Moscow against the use of chemical arms.

They agreed also to set up four more battlegroups in Bulgaria, Hungary, Romania, and Slovakia, as well as warning China not to support Russia's war.