"Want To Be Heard": Over 10,000 In France Join March Against Islamophobia

The march was called following last month's attack on a mosque in the southern French city of Bayonne by an 84-year-old man, a former far-right activist, who shot and wounded two men. 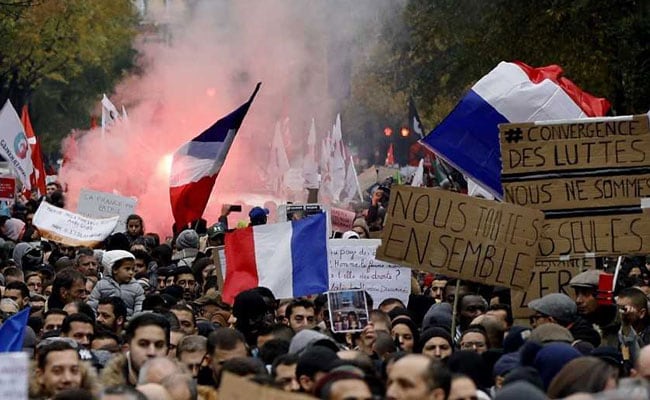 Protesters wave French flags as they march near the Gare du Nord, in Paris. (AFP)

Over 10,000 people turned out north of Paris on Sunday for a march against Islamophobia that drew criticism from both the government and the far right.

It was called following last month's attack on a mosque in the southern French city of Bayonne by an 84-year-old man, a former far-right activist, who shot and wounded two men.

Many of the protesters carried placards denouncing attacks on Islam, a number of women taking part wore traditional Muslim veils, while others had adopted veils bearing the blue, white and red colours of the French flag.

Around 13,500 people attended the march, according to a count carried out by the Occurence consultancy and commissioned by the news media, including AFP.

The march was called by a number of individuals and organisations, including the Collective against Islamophobia in France (CCIF).

It also came as the debate over the veil has been revived in France and against a background of several jihadist attacks in France in recent years.

"We came to sound the alarm, to say there is a level of hate you don't go beyond," one marcher, Larbi, a 35-year-old businessman, told AFP.

"We are open to criticism, but you mustn't go beyond certain limits of aggression," he added.

"We want to be heard,... not pushed to edge of society," Asmae Eumosid, a veiled woman from the suburbs of Paris, told AFP.

"You hear a lot of nonsense about Islam and about veiled women today," the 29-year-old, who works as an engineer in the car industry, added.

"With or without the veil, we are sick of being the last in line," said a nurse, Nadjet Fella, who said she had campaigned in Algeria against pressure to wear the veil there.

"I chose not to wear it, but it hurts me that those who wear it are picked on," she added.

In the southern city of Marseille Sunday, several hundred people staged a similar demonstration, carrying placards that read "Islamophobia kills" and shouting "We are all children of the Republic".

"There is a scandalous propaganda waged against Muslims," she said, adding that jihadist terrorism was deliberately equated with Islam.

France has between five and six million Muslims, according to the latest studies, which makes it the second largest religion in the country -- and the largest Muslim community in Europe.

But France is fiercely protective of the secular principles of its constitution, banning the wearing of religious symbols in state schools, for example.

Last week, the Socialist party formally distanced itself from the demonstration, objecting to a reference to oppressive laws concerning Muslims -- thought by some to be a reference to the 2004 law banning the wearing of veils in schools.

It said it would organise its own demonstration at a later date.

Critics also accused some of the 50 original signatories to the petition calling for the march of having links to political Islam -- including the CCIF itself.

Several members of the government meanwhile made it clear they had no sympathy for the march.

Gabriel Attal, a junior minister with responsiblity for young people denounced the what he said was the opportunism of those left-wing politicians supporting the march.

And Elisabeth Borne, junior minister for ecology, said the march was only setting people against each other.

Radical Islamism had killed far more Muslims in France than Islamophobia, she argued. "This reveals the extent of your fraud!" she added.