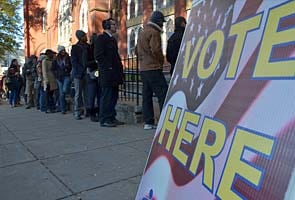 New York: Voting in a the US presidential election was the latest challenge for the hundreds of thousands of people in the New York-New Jersey area still affected by Superstorm Sandy, as they struggled to get to non-damaged polling places to cast their ballots in one of the tightest elections in recent history.

The campaigns of both President Barack Obama and Republican challenger Mitt Romney have long assumed that the heavily Democratic region would support Obama, but determined voters were taking special election shuttles from storm-hit areas and voting by affidavit from any polling place they could reach after officials put emergency measures in place.

Early turnout appeared high, despite some malfunctioning machines and confusion over where to go. At least one polling site with power was lit with flares. Some voted by flashlight.
Some polling places were in tents, and some voters were in tears.

"Oh my God, I have been so anxious about being able to vote," said 73-year-old Annette DeBona of hard-hit Point Pleasant Beach, New Jersey, who was there at dawn. "This is the happiest vote I ever cast in my life."

Tens of thousands of people along the Atlantic coast, many of them in public housing projects, continued to scramble for housing options a week after the storm as nighttime temperatures remained near freezing and power had not yet returned. A few desperate people burned their furniture.

And officials worried about the approach of yet another storm Wednesday, smaller than Sandy but with the potential for more power outages, rising waters, heavy rain and gusts of up to 60 mph (96 kph).

Forecasters on Tuesday said the storm would be weaker than first expected, but winds could gust to 50 mph (80 kph) in New York and New Jersey on Wednesday afternoon and evening. Storm surges are expected to reach perhaps 3 feet (0.9 meters).

"It's not going to be a simple task. It's going to be one of the most complicated and long-term recovery efforts in U.S. history," said Mark Merritt, president of Witt Associates, a Washington crisis management consulting firm founded by former Federal Emergency Management Agency director James Lee Witt.

FEMA said it has already dispensed close to $200 million in emergency housing assistance and had put 34,000 people in New York and New Jersey up in hotels and motels. But local, state and federal officials have yet to lay out a specific, comprehensive plan for finding them long-term places to live in an already densely developed region around the largest U.S. city.

Sandy killed more 100 people in 10 states, almost all of them in New York and New Jersey. Nearly a million homes and businesses remained without power.

Because so many people have been displaced, New York Gov. Andrew Cuomo issued an executive order allowing people to vote in Tuesday's elections at any polling place in the state. New Jersey had already taken similar measures.

"Just because you are displaced doesn't mean you are disenfranchised," Cuomo said.

"Compared to what we have had to deal with in the past week, this will be a walk in the park when it comes to voting."

As for long-term housing for the homeless, Homeland Security Secretary Janet Napolitano said Monday that the government is looking into using everything from hotels and motels to FEMA trailers and prefab homes.

"Given the extent of need, no option is off the table," she said.

Officials had yet to even establish the magnitude of the problem.

In New York City, Mayor Michael Bloomberg said Monday that officials were going door-to-door in hard-hit areas to assess the need for shelter. He said the worst-case estimate is 40,000 people, half of them in public housing.

But he said as many as 20,000 will probably get their heat and power back within a few days. Ultimately, the number of people who need longer-term housing could be under 10,000, he said.

In New Jersey, state officials said they were still trying to figure out how many people will need long-term housing. At least 4,000 residents were in New Jersey shelters.
Comments
US election