Russian state television showed Vladimir Putin in goggles and earphones crouching as he fired the silver rifle at the Kalashnikov company's shooting range outside Moscow. 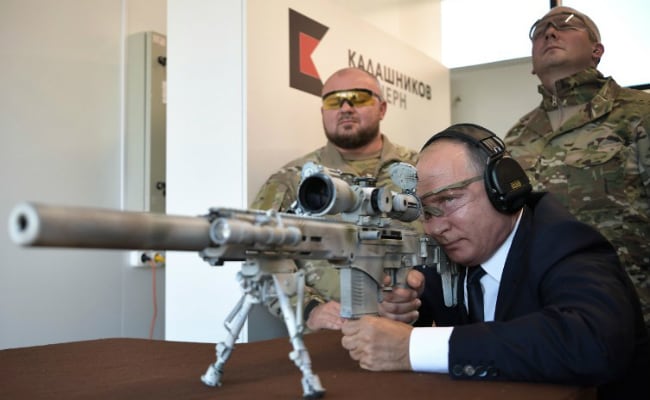 Russian President Vladimir Putin on Wednesday showed off his marksmanship by testing out a new Kalashnikov sniper rifle and hitting the target more than half the time.

Russian state television showed Putin in goggles and earphones crouching as he fired the silver rifle at the Kalashnikov company's shooting range outside Moscow.

"The target is set up practically at the maximum distance," Rossiya 24 television reported, saying that Putin appeared to be pressing the trigger while holding his breath and between heartbeats as professional snipers are supposed to do.

Putin "shot five times and hit the target more than half the time" the television channel reported.

Putin was visiting a military-themed park called Patriot in the Moscow region where he laid the foundation stone for a Russian Orthodox Church.

(Except for the headline, this story has not been edited by NDTV staff and is published from a syndicated feed.)
Comments
Vladimir PutinSniper