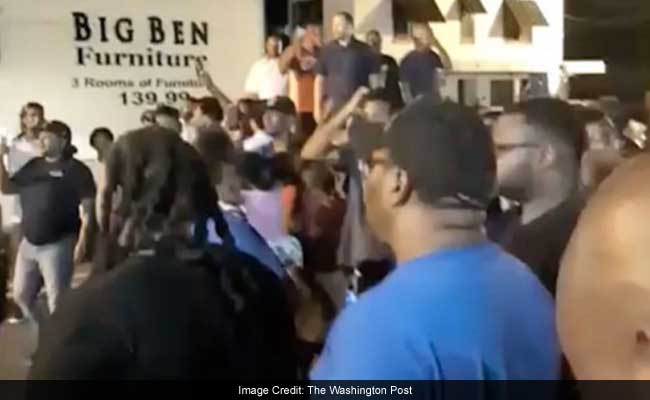 More than 100 people gathered to protest the outside the Triple S Food Mart where the incident occurred.

The video showed two Baton Rouge police officers attempting to detain Alton Sterling after the officers responded to a call "from a complainant who stated that a black male who was selling music cd's and wearing a red shirt threatened him with a gun" outside the Triple S Food Mart, a convenience store, according to authorities. Police said they responded about 12:35 a.m.

Sterling was shot and killed while pinned down by the officers.

His killing is the latest in a nationwide string of fatal police-involved arrests captured on video. Like many others, the first versions of what happened are coming more from a video showing a fragment of the incident than from the police, who have had relatively little to say so far. Thus no clear picture has yet to emerge of the full sequence of events that led to the death.

The cell phone video of the incident surfaced on social media. The footage began with police standing a few feet from Sterling. A loud pop -- like that of a stun gun -- can be heard.

"Get on the ground," a police officer yelled.

"Get on the ground," the voice yelled again, followed by a second pop.

Sterling, a large man, remained on his feet.

A police officer tackled him over the hood of a silver car, then onto the ground.

Meanwhile, another restrained his left arm behind his back and knelt on it.

Both officers drew their pistols from their holsters. In the video, Sterling appeared to be fairly immobile.

Then, the officers shouted something unintelligible, which seemed to include the phrase "going for the gun."

Two noises that sounded like shots rang out immediately after.

Whoever filmed the video then dropped the cell phone.

Sterling was pronounced dead on the scene when an ambulance arrived at 12:46 a.m.


East Baton Rouge Parish Coroner William "Beau" Clark said the initial autopsy reports show Sterling suffered more than two gunshot wounds to his chest and back and died due to a homicide, The Advocate reported.

In a statement, Baton Rouge Police Cpl. L'Jean McKneely Jr. said two officers "have been placed on administrative leave per standard procedure," though it is believed that only one officer fired shots.

The officers have not been named.

"Our guys will most likely review the video on tomorrow," McKneely told The Washington Post in an email Tuesday night.

"We give officers normally a day or so to go home and think about it" before being interviewed, McKneely told The Advocate.

Police had released no further details as of early Wednesday morning.

"This is not going to be a cover up," Holden said.

Family members, however, were outraged at what they said was a deadly instance of racial profiling.

Sandra Sterling, an aunt who said she had raised Alton like her own son after his mother died, compared Tuesday's killing to the fatal police-involved shooting of a white six-year-old in November, after which two Louisiana cops were arrested and charged with murder.

"All I want is justice for my child," Sandra Sterling told The Post over the phone Tuesday night, her voice shredded by shouting and grief. "I want the same treatment y'all are giving that person in Marksville that killed that little white baby. I want that same kind of justice."

"I don't think they would have did that to a white person," added Neco Sterling, one of Alton's cousins.

Abdullah Muflahi, the shop's owner, said he witnessed the event and offered his account to various local outlets.

"[Police] were really aggressive with him from the start," Muflahi told The Advocate.

According to Muflahi, police shot Sterling with a stun gun -- as the video suggested -- but the suspect remained standing. Police then tackled him and pinned him down. One yelled "gun," then one fired four to six shots into Sterling.

Muflahi told The Advocate, "His hand was nowhere [near] his pocket," and that Sterling was not holding a weapon.

Then, Muflahi said the officer who fired the shots began cursing and both seemed to be "freaking out."

Finally, the store owner said he heard one of the officers say, "Just leave him."

Muflahi said he saw police retrieve a gun from Sterling's pocket after the shooting.

The video has sparked outrage both in Louisiana and across the country.

Crowds began gathering outside the Triple S Food Mart at around 4:30 p.m. Tuesday -- swelling to more than 200 people at one point -- and it didn't dissipate until well after 2 a.m.

The crowd held signs with phrases like "Justice for Alton" and "#NoJusticeNoPeace" scrawled on them in black sharpie and chanted familiar phrases.

Twenty-three-year-old Nicholas Belson, a recent graduate of LSU's main campus, which is housed in Baton Rouge, was one of the protesters.

"I came out because I felt frustrated. You just feel like you have to do something. I live here," Belson told The Advocate. "Once it starts hitting where you live, you start feeling the fear."

Throughout the night, protesters let off fireworks and cars spun their tires, creating clouds of smoke. Passing drivers honked their cars' horns, seemingly in solidarity. Meanwhile, Muflahi brought bottles of water and sodas to the crowds protesting outside of his store.

On a table in front of the convenience store sat a wreath of flowers, a stuffed dog and several burned CDs. Above it hung a sign stating "RIP Big Alton."

Local politicians called on state or federal officials to take over the investigation, which was still in the hands of Baton Rouge Police as of Tuesday night.

"The video footage released today of the shooting of Alton Sterling by officers of the Baton Rouge Police Department was deeply troubling and has understandably evoked strong emotion and anger in our community," U.S. Rep. Cedric Richmond, D-La., said in a statement. "There are a number of unanswered questions surrounding Mr. Sterling's death. Including questions about the initial calls for police presence, the level of force used by officers, the verbal and physical altercation, and the response of the officers after he was shot. I call on the U.S. Department of Justice to conduct a full and transparent investigation into this incident."

Alton Sterling's name was trending on Twitter Tuesday night, with many users saying the video called to mind that of Eric Garner, the black man who was placed in choke-hold by New York Police in July 2014 and subsequently died.

Sandra Sterling said the viral video of her nephew's killing was excruciating to watch.

"That video is everywhere now," she said. "It hurts me to see it. I can see the picture but I don't want to hear the sound. The sound gets me. It gives me an anxiety attack when I hear the sound."

At the same time, however, she said she was glad the video emerged.

Before it was posted online, police and news media "twisted" the story to make Alton "seem like the bad guy," she said.

"They had already prosecuted him," she said. "Now their attitude has changed."

Sandra Sterling said she learned of her nephew's death minutes after it happened, when a neighbor who witnessed the shooting called her. She raced to the convenience store, where she could see a pair of legs sticking out from behind a car.

"Is that my son?" she asked police officers. "Is he dead?"

When the officers refused to answer, she pressed closer in an attempt to see if it was Alton.

"They said 'Get back' or they were going to Tase me," she told The Post. "They pulled their Tasers out."

She then backed away and went around to the other side of the building to get a better look. By then, however, police had moved Alton's body, she said.

Eventually, another officer arrived and told her that the body did belong to her nephew.

According to the Advocate, Alton Sterling had a criminal record dating back to 1996 that included aggravated battery, domestic abuse, possessing marijuana with the intent to distribute and illegally carrying a weapon with a controlled dangerous substance.

Sandra Sterling acknowledged that her nephew had a rap sheet but said he had "paid his debt to society."

She described him as a "generous" giant. At six-foot-four-inches and more than 300 pounds, Alton had only recently gotten out of jail and was living in Living Waters Outreach Ministries, a Christian transitional living center. Though he was struggling to get his life back on track, he still "gave away more CDs than he sold."

"When Alton ate, everybody ate," she said.

Sandra's son, Elliott Sterling, said his cousin Alton was well known in Baton Rouge for being a silver-tongued salesman. On holidays like July 4, Alton stayed outside the Triple S hawking his CDs and DVDs until two or three in the morning.

"He was really good at selling those CDs," Elliott Sterling recalled. "If somebody asked for blues or country music, he'd know it all. He couldn't make it in a regular job but he could make it selling CDs. He could converse with everybody."

He said Alton had four boys who, like him, will now grow up without a father.

"He had a hard life. He didn't have no momma, no daddy," Elliott said. "He wasn't stable at all. He lived day to day based on what he made."

He and his mother both doubted that Alton tried to pull a weapon on police, as the officers appear to shout in the video. Elliott said his cousin had been robbed at least once outside the convenience store and could have been carrying a gun "for protection," but would never have pulled it on cops.

"He had his hands up when the officer tackled him," Elliott said. "Even if he did have a gun [in his pocket] he couldn't get it out with them holding him down like that."

"Alton never had a gun. I know my child," she claimed. "My take is that when they moved him, when they pulled him up so the public could no longer see him, that gun was put in his pocket."

Baton Rouge Police have not said whether a gun was found on Sterling. Officials are expected to hold a press conference Wednesday with more details on the incident.

The Sterlings say they will be arriving early to protest.

Like Rep. Richmond, Alton's family members have called on state or federal authorities to take over the investigation.

"You're not going to go against your people," Sandra Sterling said, arguing that Baton Rouge Police should not investigate its own officers for the shooting.

Sterling is the second person fatally shot by Baton Rouge police this year. The first, was Calvin Smith, a 22-year-old black man who police say led them on a short car chase before opening fire at them, wounding two officers on Feb. 13.

Sandra Sterling compared her nephew's case to that of Jeremy Mardis, a white six-year-old boy who was fatally shot in Marksville, La., in November by two cops working second jobs as city marshals. The officers, both of whom are black, were trying to serve a warrant on Mardis's father when they chased him down a dead-end street and opened fire, killing the boy. Body cameras recorded the incident.

"They went to jail and it was all over the world," she said. "I want my son to be the same way because he was important, too."