"Are You Gay, Though?" US Man Records Alleged Assault, Prompts Probe

The suspect is cooperating with the investigation, the Salt Lake City Police Department said on Twitter, where they posted Sal Trejo's video 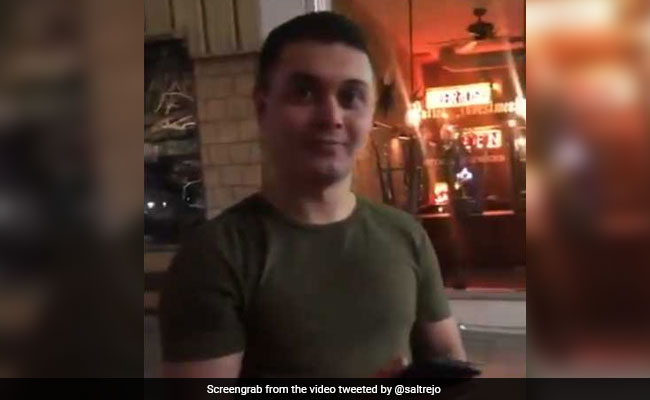 The man who allegedly attacked Sal Trejo, recorded in a video posted on Twitter.

It was closing time Saturday, and Sal Trejo waited for a car to pick up him and a group of friends in the Salt Lake City night.

An unidentified man was also looking for his ride, and Trejo, 29, said the man told someone on his phone that he was standing next to a "gay guy."

Trejo is a "proud gay man," he told The Washington Post on Monday, and the man in a green T-shirt did not know him. It was rude and unsettling, he said, for a stranger to approach him and say that. He said his friends intervened.

Trejo said he pulled out his phone to begin recording after the man used an anti-gay slur. In an eight-second video, the man appeared to want to confirm one thing. "Are you gay, though?" he asked Trejo.

Trejo answered, "Yeah, but you called me a . . ." before the man cut him off with a swing.

The man landed a blow on Trejo's upper arm, he later said. Trejo's phone sailed to the ground as several onlookers gasped. The man was picked up before police arrived and before Trejo gave a report to police, Trejo said.

Trejo posted the video on Twitter, appealing for help in identifying the alleged attacker. "I want people to be safe," he said. "Nobody wants to feel unsafe in their town."

The suspect is cooperating with the investigation, the Salt Lake City Police Department said on Twitter, where they posted Trejo's video. Salt Lake City Mayor Jackie Biskupski, who is gay, also posted the video.

The detective assigned to the case did not return a request for comment. It is not clear how police located the suspect or what role the video played in the search.

The altercation comes amid scrutiny about a high-profile hate-crime investigation involving Jussie Smollett. The "Empire" actor said that after he left a restaurant in Chicago last month, two men assaulted him because he is black and gay. But after questioning and releasing two people of interest without charges, police said new information has "shifted the trajectory of the investigation."

CNN, citing unnamed police individuals, reported that investigators are exploring the possibility that Smollett may have orchestrated the assault.

Smollett's attorneys, Todd Pugh and Victor Henderson, rejected the report. "He has now been further victimized by claims attributed to these alleged perpetrators that Jussie played a role in his own attack," they told CNN in a statement. "Nothing is further from the truth and anyone claiming otherwise is lying."

Trejo said that as "a queer person of color" he was concerned the assault would prompt similar doubts about his own story. His mother and friends advised him to be careful as news of the attack spread, he said. But the difference here, he explained, was that he had video of the altercation paired with witness accounts.

Utah Senator Derek Kitchen, the sole openly gay member of the Legislature, cited the alleged assault as further impetus to advance hate crime laws in Utah. "It's time for the UT Legislature to act on hate crimes legislation," Kitchen, a Democrat, tweeted.

State Republicans have held up the bill, The Salt Lake Tribune reported. No convictions have occurred under current hate-crime legislation, according to the paper.

Trejo said the video has been difficult to watch, but he hoped releasing it would provide a sense of accountability.

"We live in a digital age," he said. "People will know what you did."

(Except for the headline, this story has not been edited by NDTV staff and is published from a syndicated feed.)
Comments
Salt Lake CityGayLGBT community