Video: Huge Fire, The Size Of Football Pitch, At Shopping Centre In Moscow

The fire broke out at the Mega Khimki shopping centre in Moscow's northern suburb of Khimki. 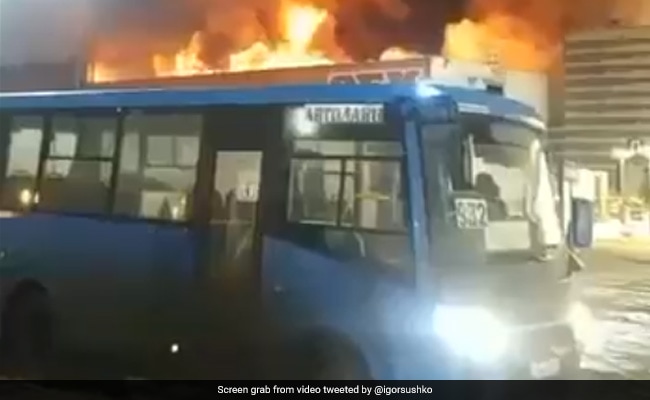 A fire the size of a football pitch ravaged a sprawling shopping centre near Moscow killing one person, officials said Friday, adding that it had been put out.

"The open blaze was put out at 10:45 am (0735 GMT)," Sergei Poletykin, the head of the Moscow region emergency services told Russian media.

Social media footage showed people running out of the Mega Khimki shopping centre in a northern Moscow suburb as the building caught fire and partially collapsed.

#Russia on 🔥: Shopping mall in #Moscow is on fire, with intermittent explosions. pic.twitter.com/gfd0xzolIU

Russia's Investigative Committee said it had information that one person had been killed and was clarifying if there were other victims.

"Investigators and forensics experts are on the scene," it said.

Emergency services said the fire in the suburb of Khimki was spread over 7,000 square metres (75,300 square feet).

The shopping centre is about seven kilometres (four miles) from Moscow's Sheremetyevo Airport.

More than 70 firefighters and 20 fire trucks were at the site, emergency services said, adding that their work was hampered due to the design of the building.

"Due to the collapse of the roof, the fire spread instantly to a large area," the Moscow region's emergency services said on Telegram.

Russia, which frequently has a lax approach to safety rules, has seen a number of deadly fires at entertainment venues in recent years.

Last month, a fire killed 13 people at a bar in the city of Kostroma. A drunk man had reportedly fired a flare gun indoors but inadequate fire safety regulations caused the large number of deaths, authorities had said.

In 2018, a fire killed 60 people in a shopping mall in the Siberian city of Kemerovo.

In 2009, another blaze at a nightclub in the Urals city of Perm killed 156 people.