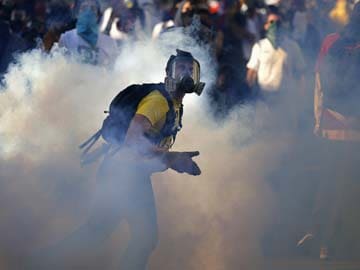 Anti-government protesters throw gas canisters back at the police during a rally in Caracas on March 2, 2014.

Caracas: While many Venezuelans went to the beach to enjoy the Carnival holiday, thousands of anti-government demonstrators marched in the capital on Sunday, trying to keep up the momentum from weeks of protests demanding the resignation of President Nicolas Maduro.

There are no signs that Mr Maduro, who says the protests are part of a US-backed coup plot, could be ousted in a Ukraine-style overthrow despite widespread discontent with soaring inflation and chronic product shortages.

Government leaders have urged Venezuelans to skip the protests and make their traditional trips to the beach during the Carnival holiday. State television was filled with images of packed beaches and smiling holidaymakers.

Opposition marchers that ranged from students to middle-aged professionals and senior citizens filled a square in the east of Caracas to protest problems including 56 per cent annual inflation and one of the world's highest murder rates.

"We have nothing to celebrate at the beach," said Carlos Torres, 34, an engineer. "Going on vacation would give credence to the government's version that there's nothing going on."

The unrest evolved from sporadic regional protests into nationwide movement after three people were shot dead following a February 12 march. At least 17 people have been killed in the South American nation's most violent unrest in a decade.

Mr Maduro sought to take the steam out of the protests by extending the usual four-day Carnival holiday by two days.

Opposition moderates question the demonstrator's tactics of blocking streets, setting up barricades and exchanging volleys of rocks with police and security forces. They say this may backfire and boost support for Mr Maduro.

The opposition repeatedly staged street protests later that year as well as in 2004, but they fizzled out as protesters grew weary of blocked streets and barricades made from smoldering trash.

PUSH FOR SOLIDARITY AT OSCARS

Mr Maduro's adversaries, tweeting to stars under the hashtag #OscarsforVenezuela, sought to persuade Hollywood stars, including Leonardo DiCaprio and Penelope Cruz, to make statements of solidarity during Sunday's broadcast of the Academy Awards.

Celebrities including Madonna and Cher have chimed in over social media, criticizing the government for what they called excessive use of force against protesters.

Mr Maduro counters that security forces have in fact been restrained in the face of violent attacks. He also says barricades set up by protesters caused deaths by preventing patients from receiving emergency health treatment.

"They want to prohibit Carnival what do you all think about that? Never. The people of Venezuela have been victorious," Mr Maduro said in televised comments from a state-run market selling subsidized groceries. "Venezuelans are enjoying the beach, the rivers, and the mountains."

The state prosecutor's office said on Sunday it had released 41 people who were arrested on Friday night in a melee involving protesters and police at the upscale Plaza Altamira, where clashes have been taking place almost every day. At least 500 people have been arrested in the violence, most of whom have been released.

Promoted
Listen to the latest songs, only on JioSaavn.com
Mr Maduro in April narrowly won the election to replace Mr Chavez after his death from cancer.

He has vowed to continue to extend his predecessor's 14-year self-styled socialist revolution that won the adoration of millions but also bitterly divided the nation of 29 million.
© Thomson Reuters 2014