'Useless' Pakistani PM Nawaz Sharif Put Up For Sale On eBay, Gets 100 Bids 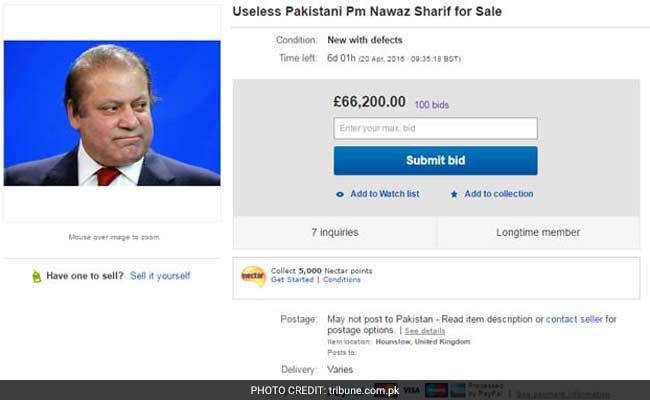 Pakistan's Nawaz Sharif was put up for sale on eBay. (File Photo)

Islamabad, Pakistan: Pakistan's Nawaz Sharif was put up for sale on eBay with bids soaring to more than $90,000 today after an anonymous user gave vent to frustrations with the prime minister over the Panama Papers leak.

"Useless Pakistani PM Nawaz Sharif for Sale" stated the post by long-time user mastavis on the popular e-commerce website, describing the leader as "new with defects".

"No longer needed. Needs a bit of TLC," the post continued.

"Not in working condition. It never worked. It was faulty and corrupt by birth. The whole range of the product and its family is Genetically defected and corrupt... Take it away and rid us of this disease."

The post, which went viral in Pakistan, promised to throw in Sharif's brother Shahbaz, the current governor of Punjab province, for free.

Sharif has been under pressure since the so-called Panama Papers leak linked his family to a series of offshore companies.

Earlier this month he announced the formation of a commission to investigate the allegations in the documents from Panama-based law firm Mossack Fonseca that have exposed how some of the world's most powerful secrete their assets offshore.

Three of Sharif's four children are named in the Panama Papers -- daughter Maryam, who has been tipped to be his political successor, and sons Hasan and Hussain.

The premier, who is currently in London, has insisted his family has done "nothing wrong".

Revenue generation is particularly sensitive for Pakistan's government, which is receiving a $6.6 billion bailout package from the IMF and has a tax-to-GDP ratio of 11 percent, among the lowest in the world.

The eBay post suggested Sharif, who is in London, was visiting the British capital for advice from former president Asif Ali Zardari, nicknamed "Mr 10 Percent" due to unproven allegations of corruption against him.

"Currently in London consulting an ex corrupt president of Pakistan on how to save his corrupt assets and save his ass," it stated.
The post also echoed criticisms about the amount of time the prime minister spends abroad.

It was removed from the site shortly after.