US Woman Said She Killed A Giraffe - To Save More Giraffes 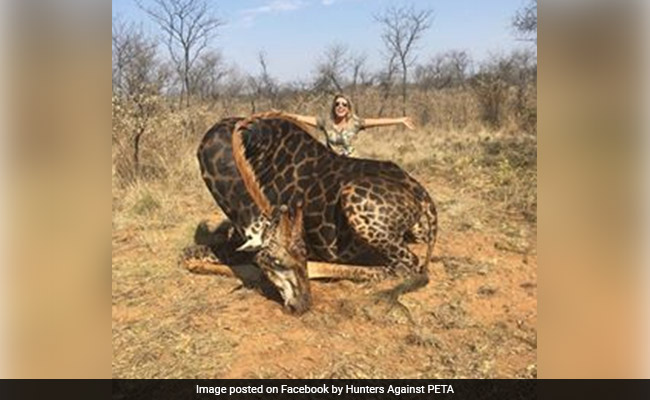 The woman said that by slaying the giraffe, she helped conserve the animals.

Tess Thompson Talley is grinning, hunting rifle in hand, in front of the dead giraffe, as she points to the sky in the way quarterbacks do after throwing touchdown passes.

The photos were taken in South Africa in June 2017, NBC's "Today" show and other media outlets reported, but only recently have social media and celebrity accounts been flooded with them, attached to condemnations of Talley's hunt as barbaric and cruel - an echo of 2015's killing of Cecil the lion.

Africland Post referred to Talley as a "white American savage" in a mid-June tweet. Actress Debra Messing called her a "disgusting, vile, amoral, heartless, selfish murderer" in an Instagram post last week, with comedian Ricky Gervais criticizing her through his typically unprintable words.

Messing wrote on Instagram: "Tess Thompson Talley from Nippa, Kentucky is a disgusting, vile, amoral, heartless, selfish murderer. With joy in her black heart and a beaming smile she lies next to the dead carcass of a *rare* black giraffe in South Africa. Giraffes are the epitome of gentle giants. They glide across the plains, like liquid; awe inspiring creatures who spend their days eating leaves and caring for their young. How DARE she. A rare animal that will be extinct by the time her grandchildren can go and gutlessly sit in the brush with a scope and pull a trigger. It does not take skill to have a ranger track a giraffe for you, and with the aid of night vision glasses and a scope, pull a trigger like some Carnival game. If you need to eat a giraffe? Get a bow and arrow and make it at least a fair fight. I am disgusted by people like you Tess. You reek of privilege and ignorance. Shame on you. And your husband Andrew Claude. Unconscionable. Irreparable damage. Irreplaceable beauty."

Talley, a Kentucky woman, did not respond to a request for comment from The Washington Post. But in a statement released to the media, she defended her hunt, saying that by slaying the giraffe, she helped conserve the animals through "game management," protecting the giraffe population because the animal shot was too old to breed but had killed three younger bulls.

"The giraffe I hunted was the South African subspecies of giraffe. The numbers of this subspecies is actually increasing due, in part, to hunters and conservation efforts paid for in large part by big-game hunting. The breed is not rare in any way other than it was very old. Giraffes get darker with age," she told the Today show in a statement.

Talley is correct. It does appear the black coat is a byproduct of age and not indicative of a rare species, Giraffe Conservation Foundation co-founder Julian Fennessy told Yahoo Lifestyle.

Fennessy identified the animal as the Southern giraffe, which is not only not rare but increasing in the wild, he said.

"Legal hunting of giraffe is not a reason for their decline, despite the moral and ethical side of it, which is a different story," he said.

It's unclear if Talley is correct in asserting big-game hunting and the revenue generated by it contributed to growth in the giraffe population.

There are less than 100,000 giraffes left in Africa, a 40 percent decline in the past 30 years because of habitat loss, human population growth and poaching, the foundation said.

Paul Babaz, the president of the hunting group Safari Club International, told CBS News that hunting giraffe is legal in South Africa, with hunters paying between $2,000 and $3,000 per animal. Those funds, he said, go to communities and provide incentives to keep the animals from going extinct.

Safari Club International could not be reached on Tuesday.

Babaz told CBS News that Talley ate some of the giraffe meat and harvested the rest for more than 200 people at a village, including an orphanage, but did not provide evidence she had done so.
In Facebook comments and in her statement, Talley said she believes her gender may feed criticism from progressive activists and celebrities.

"It is by far women that hunt who catch more grief from the 'tolerant' and 'all loving' animal rights activists. It's sickening to the majority of people how women are treated all over the world, except in the case of women hunters," she said, according to Today.

Talley did not elaborate, but The Post's Peter Holley wrote in 2015 about women - Rebecca Francis, Kendall Jones, Eva Shockey, Melissa Bachmann - who've been attacked online after publicizing their kills.

It was a dentist in his 50s, however - Walter Palmer - at the center of the Cecil the lion dust-up. President Donald Trump's sons have also been criticized for their affinity for big-game hunting.

(Except for the headline, this story has not been edited by NDTV staff and is published from a syndicated feed.)
Comments
Tess Thompson Talleygiraffe