Defense Secretary Jim Mattis spoke out on Sunday after North Korea carried out an unexpectedly strong nuclear test, said to exceed in power the 1945 atomic bombing of Hiroshima. 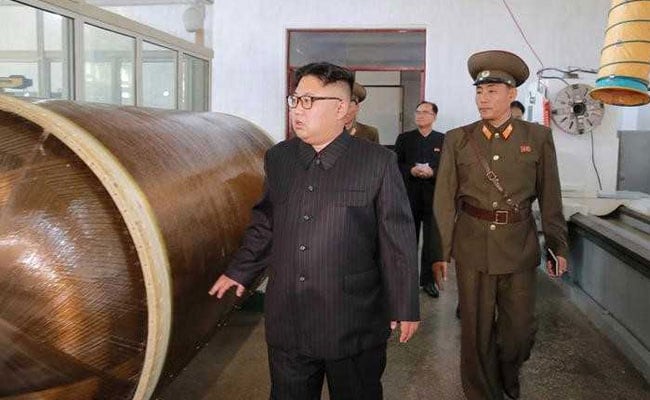 North Korea carried out a strong nuclear test, said to exceed in power the bombing of Hiroshima (File)

Washington: The United States warned it could launch a "massive military response" to any threats from North Korea following Pyongyang's provocative detonation of what it claimed was a miniaturized hydrogen bomb.

Defense Secretary Jim Mattis spoke out on Sunday after North Korea carried out an unexpectedly strong nuclear test, said to exceed in power the 1945 atomic bombing of Hiroshima.

President Donald Trump called an emergency meeting of his national security advisers and had his second telephone call of the weekend with Japanese Prime Minister Shinzo Abe, but did not talk to South Korea's Moon Jae-In -- instead accusing Seoul of "appeasement".

He threatened drastic economic sanctions, including "stopping all trade with any country doing business with North Korea."

US monitors measured a powerful 6.3-magnitude earthquake near the North's main testing site on Sunday, felt in parts of China and Russia, with an aftershock possibly caused by a rock collapse.

The North -- which in July carried out two intercontinental ballistic missile (ICBM) launches that apparently brought much of the US mainland into range -- hailed its test of what it described as a hydrogen bomb designed for a rocket as "a perfect success."

Mattis told reporters: "Any threat to the United States or its territories, including Guam, or our allies will be met with a massive military response, a response both effective and overwhelming.

"We are not looking to the total annihilation of a country, namely North Korea," he added, but warned: "We have many options to do so."

Pyongyang residents celebrated as a jubilant television newsreader hailed the  "unprecedentedly large" blast which she said had moved the country closer to "the final goal of completing the state nuclear force."

It prompted an international chorus of condemnation, including from both the North's key ally China and Russia, which also has links with Pyongyang.

UN Secretary General Antonio Guterres condemned the test as "profoundly destabilizing," while the Security Council will hold an emergency meeting on Monday.

On Monday Seoul carried out a live-fire exercise in the East Sea, its name for the Sea of Japan, using a volley of missiles to simulate an attack on the North's nuclear site.

But Trump criticised the US treaty ally on Twitter, saying: "South Korea is finding, as I have told them, that their talk of appeasement with North Korea will not work, they only understand one thing!"

In a statement, the presidential Blue House retorted: "Korea is a country that experienced a fratricidal war."

It "will continue to push for the denuclearization of the Korean Peninsula through peaceful means working together with our allies", it added.

Hours before the test, the North released images of Kim at his country's Nuclear Weapons Institute, inspecting the device it called a "thermonuclear weapon with super explosive power" entirely made "by our own efforts and technology," according to the Korean Central News Agency.

A series of US and United Nations-backed sanctions seem to have had little effect on Pyongyang.

While the United States has virtually no trade with the North, the burden of sanctions such as Mnuchin described would fall heavily on China, which buys about 90 percent of North Korean exports.

South Korean experts said the tremor near the North's main test site was five to six times stronger than that from a 10-kiloton test a year ago.

Trump has warned Pyongyang that it faces "fire and fury" and that Washington's weapons are "locked and loaded."

But the North has huge artillery forces within range of Seoul, a city of 10 million people, and could inflict mass casualties in retaliation to any strike.

Promoted
Listen to the latest songs, only on JioSaavn.com
"There are no realistic military options in terms of striking North Korea, because doing so would likely spark a full-scale war," Mark Fitzpatrick, executive director for America of the International Institute for Strategic Studies, told AFP.

(This story has not been edited by NDTV staff and is auto-generated from a syndicated feed.)
Comments
PyongyangNorth Korea Hydrogen Bomb