More than an hour in, a black housefly sat for several minutes on Mike Pence's white hair, hanging on as he shook his head and parried with Harris over race and criminal justice. 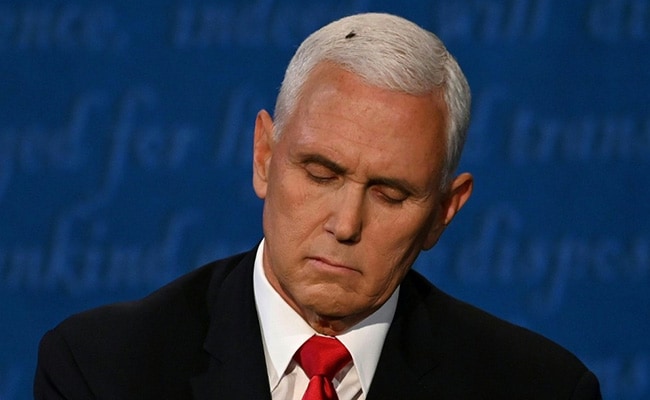 A fly rests on the head of Mike Pence as he takes notes during the vice presidential debate.

Here are a few standout moments from the debate:

Frustrated that Trump and the Republican-controlled Senate may soon cement a 6-3 conservative majority on the Supreme Court, some on the left have called on Biden to expand the nine-member court to 11 or 13 seats. Harris declined to say whether she supported that idea.

Her silence was telling, Pence said. "The straight answer is they are going to pack the Supreme Court if they somehow win this election," he said.

The relatively sedate atmosphere allowed stark policy differences to come to the fore.

On global warming, for example, Pence declined to say that it is caused by human activity - the overwhelming scientific consensus - and said Biden's proposed fixes would be too expensive.

He also inaccurately said that Biden would ban hydraulic fracturing. Biden, in fact, has said repeatedly he would not pursue a fracking ban, although he would oppose new permits for drilling on federal land. It is a key issue in electoral backgrounds like western Pennsylvania and eastern Ohio, where the technique has led to a boom in energy production over the past decade.

A FLY IN THE OINTMENT

A stray housefly sat for several minutes on Pence's white hair, hanging on as he shook his head and parried with Harris over race and criminal justice -- providing comic fodder for late-night hosts and Twitter users alike. Biden's campaign sold flyswatters to capitalize on the buzz.

COLORING INSIDE THE LINES

Following last week's insult-laden debate between Biden and Trump, both candidates took a relatively low-key approach, greeting each other respectfully and rarely raising their voices.

Things eventually heated up, but only to a simmer, not a boil. When Pence interrupted, Harris was able to silence him with a simple phrase: "Mr. Vice President, I'm speaking."

Pence closed with a paean to civil discourse.

"In America we can disagree. We can debate vigorously as Senator Harris and I have on this stage tonight. But when the debate is over, we come together as Americans," he said.

SPEAK NOT OF THE AGED

Biden, 77, would be the oldest president in U.S. history if he were to win the election. Trump, 74, spent the weekend at a military hospital outside Washington after contracting COVID-19.

Both candidates ducked questions about the health of their elderly running mates.

When asked whether there was a firm plan of succession in place, Pence, 61, used his time to talk about vaccines, while Harris, 55, talked up her biography as a child of immigrants who went on to serve as California attorney general.

Likewise, neither answered directly when asked why their older running mates had not released detailed health information. Pence thanked those who had wished for Trump's recovery, while Harris criticized Trump for not releasing his tax returns.

Both candidates also danced around what would happen in the event of a disputed election -- a scenario prompted by Trump's repeated statements that he might not accept the outcome if he does not win.

Harris urged supporters to vote, rather than playing up the possibility of legal wrangling or violence at polling places. "If we use our voice and use our vote we will win," she said.

Pence did not promise that Trump would leave office if he lost. Instead, he accused Democrats of denying the legitimacy of Trump's 2016 victory through investigations and impeachment.