An avid hunter and ex-soldier who knows how to handle a weapon, Vic Bencomo has a new preoccupation: tightening gun regulation in the United States. 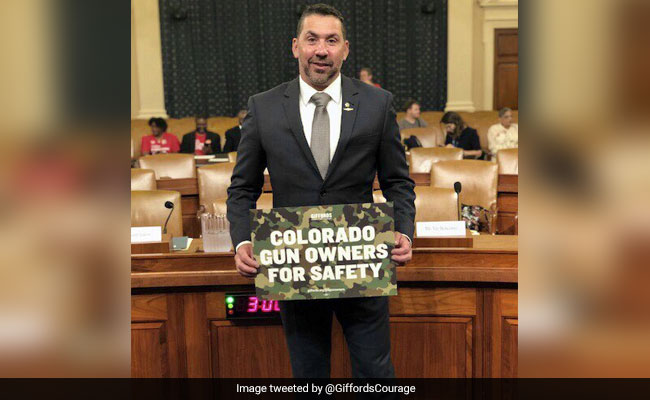 Vic Bencomo said he believes that if we have proper gun legislation in place, that will help save lives.

An avid hunter and ex-soldier who knows how to handle a weapon, Vic Bencomo has a new preoccupation: tightening gun regulation in the United States, where firearms take tens of thousands of lives a year.

The final straw came, the 45-year-old Iraq War veteran says, when he found himself having to cope with former brothers in arms dying by suicide after returning from the battlefield.

"I'm... sitting and watching the atrocities that are occurring in the United States every single day," Bencomo, who now works in computing and lives in Colorado, told AFP.

"It just was a tipping point -- I stopped wanting to be a couch critic, and I actually decided to stand up and do something."

Around 6,000 US veterans take their own lives annually but many of those deaths are preventable, according to Bencomo, who spent 22 years in the Navy.

"I believe that if we have proper gun legislation in place, that will help save lives," said the veteran, who taught his sons to shoot when they were infants and takes them pheasant and deer hunting.

In January, Bencomo helped set up Colorado Gun Owners for Safety, which has the backing of Democratic former congresswoman Gabby Giffords, who survived being shot in the head in a 2011 mass shooting.

Similar groups have sprung up in Minnesota and Texas, although with a total membership of just 180 or so, the movement's influence remains limited in a country where 30 percent of adults own at least one firearm.

Bencomo says he is regularly accused by critics of infringing their freedoms as gun owners, even though he supports the right to bear arms enshrined in the US Constitution.

The powerful American gun lobby, meanwhile, has "bastardized the true meaning" of the Second Amendment.

"They have (kept) a chokehold on our country for the last 20 years, changing the narrative of what our forefathers really believed the Second Amendment's about," he said.

Bencomo seeks to find a midpoint between the positions of the National Rifle Association and its opponents.

"If there's not a moderate person like myself in the middle, the pendulum will swing too far left," he said. "We will start to see gun laws in action that may be more extreme than hunters or firearm folks would like to see."

In fact, a glut of mass shootings in recent years has not led to significant reform, with activists blaming the NRA's outsized influence over elected officials, including President Donald Trump.

This week, Bencomo traveled to Washington to testify before Congress in support of these reforms, which are supported by the general public and, crucially, most gun owners.

He is also in favor of a ban on the sale of assault rifles such as those used to gun down almost 40 people in El Paso, Dayton and Odessa.

"AR-15, or any type of assault rifles, belong in one place," said Bencomo. "That's the battlefield, not on the streets of America."