US Speaker Blocks Trump From Delivering State Of The Union Speech

Since President Woodrow Wilson in 1913, both Republican and Democratic presidents, with the House speaker and the vice president sitting behind them, have addressed the nation and Congress in a House chamber. 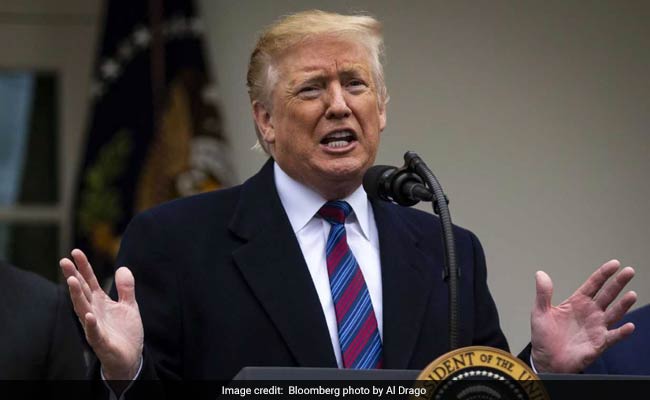 House Speaker Nancy Pelosi on Wednesday rescinded her invitation to President Donald Trump to deliver the State of the Union in the House next week - denying him a national platform for the annual speech in an extraordinary standoff between the two most powerful figures in the nation.

The cancellation - part of an escalating and at times personal feud between the newly elected Democratic speaker and the Republican president - illustrates the extent of the dysfunction that has gripped Washington and America's body politic amid the longest federal government shutdown in U.S. history.

The imbroglio also underscores the extent of the enmity that has developed between Trump and Pelosi, neither of whom appears ready to retreat in their standoff over the president's demand for money to fund part of his promised wall along the U.S.-Mexico border.

Pelosi and other Democratic leaders appear increasingly confident of their position in the fight as the impact of the government closures worsens while voters in numerous recent polls heap blame primarily on Trump and Republicans for the impasse.

The sparring has now led to the effective cancellation of a decades-old tradition in which presidents aimed to unify the nation, even in times of divided government. An annual show of unity has devolved into disunity.

Earlier Wednesday, Trump tried to call Pelosi's bluff, saying he planned to honor the speaker's invitation she extended earlier this month when the partial government shutdown was still in its relative infancy. Not delivering it in the House chamber, Trump wrote to her, would be "very sad."

But later Wednesday, Pelosi, D-Calif., officially called off the address in the House chamber, asking instead for a new, "mutually agreeable" date once the government has reopened. Trump, faced with that reality, said he would be doing "something in the alternative."

The squabbling extended a fight that erupted last week when Pelosi suggested to the president that they postpone the address, citing security concerns caused by the shutdown that were later dismissed by administration officials.

The historic partial government shutdown, now in its 33rd day, has left hundreds of thousands of federal employees without pay while the Trump administration began preparing for a funding lapse that could stretch into the spring.

Since President Woodrow Wilson in 1913, both Republican and Democratic presidents, with the House speaker and the vice president sitting behind them, have addressed the nation and Congress in a House chamber packed with members of the diplomatic corps, the Supreme Court, the Joint Chiefs of Staff, family members and guests.

Pelosi's decision appears to be without precedent, as there seems to be no other instance of House speakers denying the use of the chamber for a president's State of the Union, according to congressional historians.

"There's none. There's nothing close to it," Tim Naftali, a presidential historian at New York University who is the co-author of the book "Impeachment: An American History."

The challenge for Democrats, Naftali said, is to avoid giving the impression that they are reacting to Trump with pettiness.

"They should welcome hearing from him all the time," Naftali said of Democrats, noting that one of the recent critiques of the White House is that it has cut back on press briefings. "He should be invited in a secure location wherever he wants to, and Democrats certainly shouldn't give the impression that they're boycotting. . . . If you don't allow both sides to emerge as winners, divided government results in paralysis."

One similar parallel was in 1986, when President Reagan asked Speaker Tip O'Neill for permission to deliver a speech lobbying lawmakers on aid for contra rebels in Nicaragua in advance of a closely-watched vote. But O'Neill turned down the president's request, which was not for a State of the Union.

It was also under Reagan's presidency that a State of the Union was last postponed.

On Jan. 28, 1986, Reagan was preparing his speech when the space shuttle Challenger exploded. His formal address to Congress was postponed a week, and Reagan instead appeared in the Oval Office to mourn the seven astronauts on board. In 1946, President Harry S. Truman also postponed his State of the Union for four days, but ultimately delivered it in writing instead.

In her letter to Trump on Wednesday, Pelosi said the president can give the annual speech at the Capitol once the government shutdown is over. When she extended Trump the invitation earlier this month on Jan. 3, "there was no thought that the government would still be shut down," Pelosi wrote.

"I am writing to inform you that the House of Representatives will not consider a concurrent resolution authorizing the president's State of the Union address in the House Chamber until government has opened," Pelosi wrote to Trump. "Again, I look forward to welcoming you to the House on a mutually agreeable date for this address when government has been opened."

The House and Senate must pass a concurrent resolution for a joint session of Congress to hear the president.

Pelosi's letter came just a few hours after Trump had informed her that he planned to show up at the Capitol on Jan. 29 to deliver his annual speech to Congress.

Pelosi maintained in a brief exchange with reporters at the Capitol that her offer to Trump still stands as long as they are able to find a "mutually agreeable date."

Her decision drew a sharp rebuke from congressional Republicans, especially among the president's closest allies.

Shortly before Pelosi released her letter, House Minority Leader Kevin McCarthy, R-Calif., released a resolution that would permit the president to deliver his address. But Pelosi's statement means that the measure stands little chance of being taken up by the Democratic-led House.

In a statement, Sen. Lindsey Graham, R-S.C., called Pelosi's decision to rescind her invitation to Trump a "new low for American politics."

"The State of the Union is a tradition which has been carried out during times of war and peace, turmoil and tranquility. It is an important piece of our history and government," Graham said. "Speaker Pelosi's decision to ignore this long-standing American tradition is absurd, petty, and shameful."

It's unclear how Trump will deliver remarks, if not in the House. The administration has planned possibilities both in Washington and elsewhere nationwide, and Trump has received overtures from state officials in West Virginia, North Carolina and Michigan to give the State of the Union there.

In the private meeting with conservative leaders, Trump remarked that Pelosi's decision to disinvite him from the House chamber was a disgrace, and that it was bad for the country, according to Mark Krikorian, the executive director for the Center for Immigration Studies who was in attendance.

Krikorian said he suggested to the president that he deliver the speech from the border, although administration officials in the meeting only indicated they would have an announcement about Trump's State of the Union plans at some point.

Pelosi had sent a letter to Trump on Jan. 3 inviting him to deliver his annual address at the Capitol. But with Democrats and the White House at an impasse over Trump's border wall, Pelosi wrote to Trump again last week urging him to delay the speech, or deliver it in writing.

In an exchange with reporters Wednesday morning, White House press secretary Sarah Sanders said the Secret Service and the Department of Homeland Security had "satisfied" the safety concerns raised by Pelosi, without giving further details.

In a speech to the winter meeting of the U.S. Conference of Mayors Wednesday afternoon, Pelosi made no mention of the presidential address. She continued to accuse Trump of "holding the health, safety and paychecks of the American people hostage" and said that Democrats fear he may do so again in future if they agree to his demands.

"That is why we must hold the line on this shutdown," Pelosi said.

The House has passed a number of bills that would reopen the government without border wall funding, and Democrats plan another vote Thursday. The Republican-controlled Senate is planning votes Thursday as well on two competing proposals, neither of which is expected to garner the 60 votes necessary for passage.

(Except for the headline, this story has not been edited by NDTV staff and is published from a syndicated feed.)
Comments
Donald TrumpNancy Pelosi