US Schools Reopen For In-Person Classes In Coronavirus Hotspots

Several other large cities, including Chicago, Houston, Los Angeles, and Miami have announced they will stick to distance learning for now. 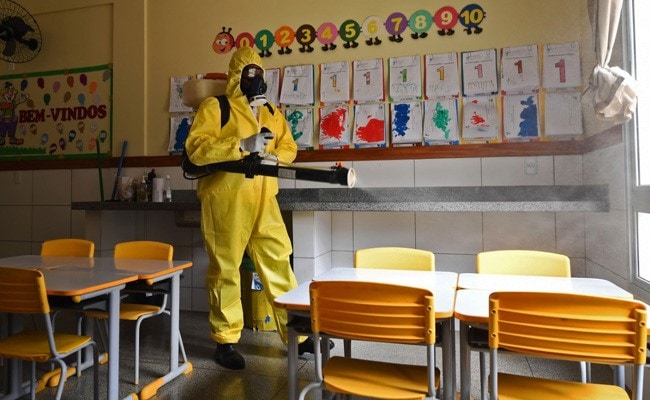 Undeterred by the coronavirus, schools in several US states have reopened for in-person classes -- but some have already been hit by large quarantines of students and staff following fresh outbreaks.

In Mississippi -- the state with the country's highest positivity rate at 22 percent of everyone tested, sick or otherwise -- the Corinth School District has so far seen eight confirmed cases across several schools, according to officials.

As a result, over 100 people who came into close contact with them have been asked to quarantine, swiftly disrupting local authorities' plans for a return to normal.

The city of Corinth is located in Alcorn County where positivity rates are 25 percent and ICUs are full, according to the tracking site CovidActNow.

Health experts say that if the proportion of positive tests in a given location is above five percent, the virus is spreading rampantly.

Mississippi Governor Tate Reeves told Fox News the quarantine was in fact evidence things were working as they should.

"Those who want to attack everyone look at that as a negative, I actually look at it as a positive," he said.

"We've identified positive cases, we've contract traced those back and we're trying to protect those kids."

The district's troubles highlight the dangers of reopening schools, a key priority of President Donald Trump as he tries to kickstart the economy ahead of the election.

After pressure from the president, the Centers for Disease Control and Prevention last month issued new guidelines on how to open up classrooms.

It firmly weighed its recommendations in favor of in-person learning because of the negative impact of lockdowns on social development and mental health.

This goal is shared by outside experts including the American Academy of Pediatrics, but a major problem is a lack of clarity around when it is safe to reopen.

In the absence of official guidance, experts have devised their own metrics.

"The Mississippi example is a clear cautionary tale of what reopening will look like unless the community level transmission is contained," said Thomas Tsai, a Harvard professor and member of the Harvard Global Health Institute.

Harvard has created a dashboard that gives every county in the country a color rating based on a seven-day average of its per capita daily cases.

"No amount of mask wearing and HVAC filtration in the schools is going to minimize risk if there's a wildfire of COVID burning in the surrounding community," stressed Tsai.

New York Governor Andrew Cuomo told reporters Friday that schools will be reopening, citing his state's success in battling the virus, with schools planning for a part-time approach.

The state averages three daily new cases per 100,000, placing it in the "yellow" category on the Harvard dashboard, meaning schools can open with a robust testing plan.

"It's not zero risk, but it's acceptable risk given the benefits of in person education," said Tsai.

Several other large cities, including Chicago, Houston, Los Angeles, and Miami have announced they will stick to distance learning for now.

But Republican-led states of Mississippi, Georgia, Tennessee and Indiana opened this week and last.

There are also strong indications that officials in Georgia have rushed to open too soon and without adequate measures.

Two North Paulding High School students were suspended after posting pictures of crowded hallways that went viral on Twitter, according to reports.

One of them, 15-year-old Hannah Watters, told CNN: "I'd like to say this is some good and necessary trouble," quoting the late civil rights leader John Lewis.

"My biggest concern is not only about me being safe, it's about everyone being safe."

The school, which is also in a county where there is rampant community transmission, later reversed its decision, she told CNN Friday.

"The high school students who took photos of others walking around school unmasked revealed a truth that needed to be seen," he said.

"They are saving lives by their actions, if decision makers seeing the truth leads to change, and sadly that is what it usually takes to do the right thing."