US Says Pak Activist's Family Being Harassed After Father Detained

Pakistani women rights activist Gulalai Ismail, who is currently in the US, on Thursday said that her father was picked up by "men wearing militia dress" in Peshwar. 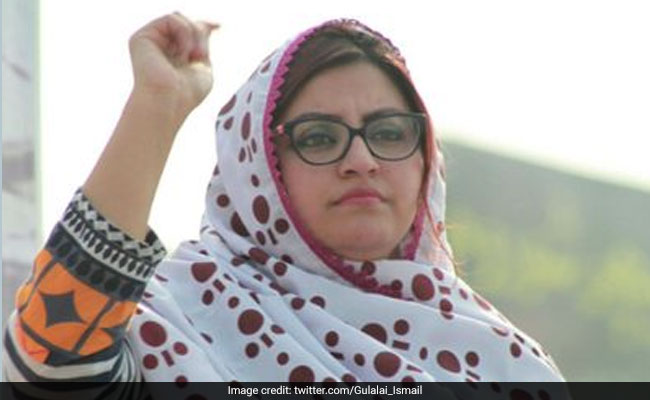 Gulalai Ismail escaped Pakistan to seek political asylum in the US in September.

Expressing concern over the ''detention'' of Pakistani women's rights activist Gulalai Ismail's father in Pakistan and continued harassment faced by her family, US on Friday urged Islamabad to uphold the rights of citizens.

"We are concerned by reports of the continued harassment of Gulalai Ismail's family, and her father's detention today. We encourage Pakistan to uphold citizens' rights to peaceful assembly, expression, and due process," Acting Assistant Secretary Alice Wells said, according to a tweet by Bureau of South and Central Asian Affairs.

Retweeting the tweet by Bureau of South and Central Asian Affairs, Ms Ismail wrote, "U.S State department is concerned about the detention of my father. By persecuting citizens for exercising their human rights Pakistan is damaging its own reputation."

Pakistani women rights activist Gulalai Ismail, who is currently in the US, on Thursday said that her father was picked up by "men wearing militia dress" in Peshwar.

"My father has been picked up by men wearing Malitia dress from outside of Peshawar High Court an hour ago," Ms Ismail had tweeted.

Ms Ismail termed the abduction of her father in Peshawar an attempt to terrorise the women of Pakistan and others who dare to use their "conditional rights".

"Abduction of my father is an attempt to terrorise women of Pakistan who've got fathers' backs; to stifle dissent, to terrorise people who dare use their conditional rights," the women's rights activist has said in another tweet.

Ms Ismail managed to escape from Pakistan to seek political asylum in the United States in September after being accused of treason. She reached the US months after she was arrested and released for holding a protest demonstration outside the National Press Club in Islamabad.