In the eyes of Minadakis - whose nickname among friends is "The Crab" - the billboard was an existential challenge. 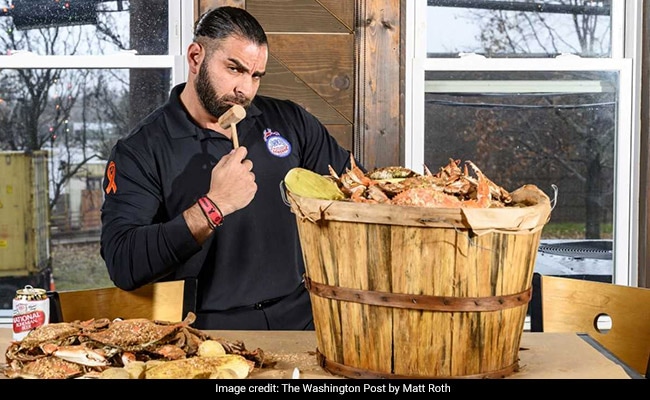 John Minadakis, owner of Jimmy's Famous Seafood in Baltimore, with a bushel of steamed crabs.

Late last summer, People for the Ethical Treatment of Animals, aka PETA, purchased space on a billboard in downtown Baltimore. The ad featured a large crab with the caption: "I'm ME, not MEAT. See the Individual. Go Vegan." It was one of a series of PETA ads, dating to 2016, that had starred animals - cows, chickens, pigs, turkeys, fish - imploring humans to eat plants instead of them.

Now PETA was coming for the crustacean that is a sacrosanct dish to a great number of Baltimoreans. (As the film "Wedding Crashers" puts it, "Crab cakes and football - that's what Maryland does.") "I said, 'This can't be real,' " recalls John Minadakis, 35, the owner and operator of Jimmy's Famous Seafood, a family-run restaurant in southeastern Baltimore. " 'There's no way they're that stupid.' "

But amid his incredulity, Minadakis also saw a chance to stir the proverbial pot. (Perhaps a pot in which multiple crabs are being cooked.) Two days after the billboard went up, Jimmy's Famous Seafood tagged PETA in a tweet containing a good-morning message, a crab emoji and a picture of steamed crabs smothered in seasoning. PETA replied that afternoon, saying it would "not be deterred by taunts because no one wants to be boiled alive."

By the time PETA clapped back, however, it was too late. Reply after reply poured in from users cheering on the restaurant and promising to stop in and buy a meal. Minadakis gave interviews to local Baltimore stations and appeared on Fox News' morning show "Fox & Friends" in early September. Pretty soon, what had been an isolated, local row blossomed into national news. Supporters from across the country, he says, began calling and emailing. Some, he reports, saw the restaurant's stand as an important rampart in the battle against political correctness.

In the eyes of Minadakis - whose nickname among friends is "The Crab" - the billboard was an existential challenge. "The crab and crab cake have put us through school, will put our kids through school," he says, referring to himself and Tony, his 33-year-old brother who runs the restaurant with him. "It's our family's income. That's what we know."

Their father, Demetrios, founded the restaurant in 1974 near the blue-collar suburb of Dundalk. A first-generation Greek immigrant who was known as Jimmy to friends, he raised his family in the apartment above. In those days, Jimmy's Famous Seafood was a one-room joint, without the spacious, wood-floored dining room that now sits behind the original space, which was converted into a casual bar.

Minadakis was 20 when his dad died in 2003. Suddenly, he and 16-year-old Tony were in charge. "We were little kids trying to run a business," he says. "Like any 20-year-old, you think you know everything when in fact you don't know anything."

The battle with PETA arrived at a difficult moment for the Maryland crab industry. The winter weather of 2017-18 had lasted longer than usual, delaying the start of crab season, which usually begins in early May. The prolonged cold killed an estimated 16 percent of adult crabs in Maryland. In 2017, there were 455 million crabs in the Chesapeake Bay, an estimate based on a wintertime dredge survey; in 2018, there were just 371 million.

Jimmy's stand against PETA's billboard, then, was almost like a bulwark in a time of need. "We were getting handwritten letters, phone calls on the landline, and then young guys emailing us from Crisfield and up and down the Eastern Shore," says Minadakis. "This is our livelihood, man. If [PETA is] turning people against the crab, it's putting you out of business."

Several weeks after his appearance on Fox News, Minadakis upped the ante. The restaurant erected a billboard of its own near the original billboard. Another enormous crab greeted onlookers, only this time with a different caption, one that was a subtle nod to PETA's slogan "I'm ME, not MEAT." It read: "SteaMEd crabs. Here to stay. Get Famous."

PETA, naturally, was not persuaded. "It's certainly no surprise that a seafood restaurant doesn't want people thinking about the fact that crabs are intelligent, sensitive animals who suffer when they're boiled alive," says Ashley Byrne, an associate director with the organization. On its website, PETA says that crabs being boiled "will fight so hard against a clearly painful death that their claws often break off in their struggle to escape" the pot. An investigation the group conducted about five years ago at a seafood processing plant alleged that crabs were dismembered alive.

As for the economic argument - that they are harming an important source of income for many Marylanders - PETA doesn't find it overly compelling. "Most people would never excuse boiling a dog or cat to death in a pot of scalding hot water on the basis of trying to make money. This is no different," Byrne says. "Sooner or later this industry will have to move ahead and innovate."

This wasn't the first time PETA has targeted a beloved local cuisine. The group had previously run an ad in Wisconsin, for instance, against mixing milk in your morning coffee. And shortly before it put up its billboard against Maryland's favorite shellfish, it launched a similar effort in Maine, buying advertisements in the Portland airport imploring visitors to eschew lobsters. (The ads received forceful pushback in an editorial by the Portland Press Herald.) In November, PETA took on another Baltimore institution, running television ads against Johns Hopkins University for conducting medical experiments on animals. The ads, according to the Baltimore Sun, used a teddy bear as a stand-in for a lab animal and showed it getting injected and cut up. Interestingly, that campaign didn't inspire the same backlash as PETA's campaign to protect crabs.

While both crab billboards have now come down, Minadakis says the feud has been good for business. "We've had people coming from Montana, Kentucky, Cincinnati. They've based their trips here over a tweet, telling us they just want to show their support," he told me at the restaurant in early December, as I sat taking big bites out of a Jimmy's crab cake sandwich. The restaurant's Twitter following ballooned to more than 100,000. And its online business - Jimmy's ships crabs and crab cakes nationwide - has surged. Compared with this time last year, the number of online orders has tripled.

The boon to business at Jimmy's causes no regrets from PETA. Dozens of people have told the organization that they have decided to stop eating crab altogether, according to Byrne. "The lasting effect of that greatly outweighs 30 seconds of attention on one stupid restaurant," she says.

The day of my visit, I parked in a new lot that had been paved the week before to accommodate the additional staff hired to help with the extra shipments. "Every sales email we get, every cold call, people say, 'Keep kicking PETA's a--,' " says Minadakis. "They changed our life."