US Northeast digs out from snow, gas rationing expands 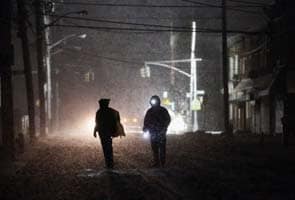 New York: New York City and much of the US Northeast dug out from a snowstorm that hammered a region struggling to recover from the devastation of Superstorm Sandy, as local governments expanded gasoline rationing in the face of shortages that may last weeks.

The unseasonably early winter storm dumped more than a foot (30 cm) of snow on parts of Connecticut on Wednesday and battered the region with 50 mph (80 kph) winds, plunging 300,000 homes and businesses back into darkness. Rides aboard crowded trains were made more uncomfortable by the bulky coats, hats and scarves freezing commuters had to wear.

Bitter cold, rain, snow and powerful winds added to the misery of disaster victims whose homes were destroyed or power was knocked out by Sandy. The storm came ashore on October 29 and caused widespread flooding, leading up to as much as $50 billion in economic losses and prompting the medical relief group Doctors Without Borders to set up its first-ever US clinic.

The Federal Emergency Management Agency said it was providing mobile homes to house those displaced by the storm, a reminder of the scramble after Hurricane Katrina seven years ago to tend to the newly homeless. Some evacuees will be put up nearly 200 miles (321 km) from home, FEMA said, because there is little available space closer to the city.

The snowstorm also created another commuting nightmare for a region whose transportation system was already under repair.

Train service was again spotty and crowded Thursday night; the Long Island Rail Road appealed to people to travel later in the evening. People coming out of the Newport PATH station in New Jersey had to negotiate busy rush-hour traffic without traffic lights, so one man took it on himself to direct cars.

Commuters were lucky to even get there, though.

Kim Chan said she would give her train line to Maplewood another 10 minutes before heading to her mother's house in the city for the night. "I'm not going to see my daughter until maybe when the trains are fixed," said Chan, who works for a dance company. "I'm not sure living in New Jersey is worth the effort."

With drivers still struggling to find adequate fuel, New York City Mayor Michael Bloomberg said the city would begin an indefinite program of gas rationing, modeled on one New Jersey implemented last week - allowing drivers to fill up on alternating days depending on their license plate number - that has reduced lines dramatically of late.

Bloomberg indicated that the city had little choice. One gas station in Brooklyn had an hour-long line Thursday just for government workers, while another along the busy Belt Parkway in Queens had a two-hour line for just one working pump.

After he announced the rationing plan, a gas line snaked for blocks through Manhattan's Soho neighborhood.

"It now appears there will be shortages for possibly another couple weeks," Bloomberg said, later adding, "If you think about it, it's not any great imposition once you get used to it."

Neighboring counties would implement a similar program, he said, in an effort to cut down lines that ran for hours at local filling stations following Sandy. The city's iconic yellow taxis are exempt from the new regulation.

New Yorkers, never known for holding their tongues, let their exasperation with the bad weather show.

"God hates us!" the New York Post said in a front-page headline.

A week after Sandy, Doctors Without Borders established temporary emergency clinics in the hard-hit Rockaways - a barrier island in Queens facing the Atlantic Ocean - to tend to residents of high-rises, which still lacked power and heat and were left isolated by the storm.

"I don't think any of us expected to see this level of lacking access to health care," said Lucy Doyle, who specializes in internal medicine at New York's Bellevue Hospital and has done stints with the group in the Democratic Republic of the Congo and Kenya. "A lot of us have said, it feels a lot like being in the field in a foreign country."

The medical situation was better elsewhere, though other resources were still lacking. Residents at Waterside Plaza, an apartment complex over the East River in Manhattan, had their power restored on Wednesday - temporarily, anyway.

Sandy's death toll in the United States and Canada reached 121 after New York authorities on Wednesday reported another death linked to the storm in the Rockaways.

"Can you believe this? Enough is enough," said Cindy Casey, whose Belle Harbor home one block from the beach in the Rockaways was swamped by Sandy, as she looked out at the snow blanketing the neighborhood devastated by flooding and fire.

Sandy surrounded Casey's home with six feet (two metres) of water and sparked a fire that destroyed at least 20 houses in the neighborhood before stopping short of her own.

"The kids have been home for nearly two weeks and I'm not working, and when I'm not working I'm not making any money. This hasn't been easy," said Michael Platt, 49, an electrician from Toms River, New Jersey, who got an estimated foot of snow.

Amtrak plans to reopen three tunnels to the city's Penn Station by late Friday. In the meantime, New Jersey officials said the state would make more free shuttle buses and ferries available to help commuters get into Manhattan.

New York Governor Andrew Cuomo, who said estimates put the damage and economic loss for the region at $50 billion (including $33 billion in New York state), turned his ire on the power utilities, which he said had failed customers.

Some 715,000 homes and businesses in the region were without power, a net increase of nearly 43,000 from Wednesday night after the nor'easter knocked electricity out to more customers following those who had lost it from Sandy.

The storm damage exposed flaws in the regulation of power utilities that will require a complete redesign, said Cuomo, who oversees the state-controlled utilities and appoints the members of the Public Service Commission, which regulates investor-owned utilities such as Consolidated Edison.

"It is nameless, faceless bureaucracy that is a monopoly that operates with very little incentive or sanction. ... They have failed the consumers," Cuomo said.