US Military Looking At Deploying Anti-Missile System In Germany

Talk of deploying a missile system in Europe also comes against the backdrop of rising tensions between the West and Russia. 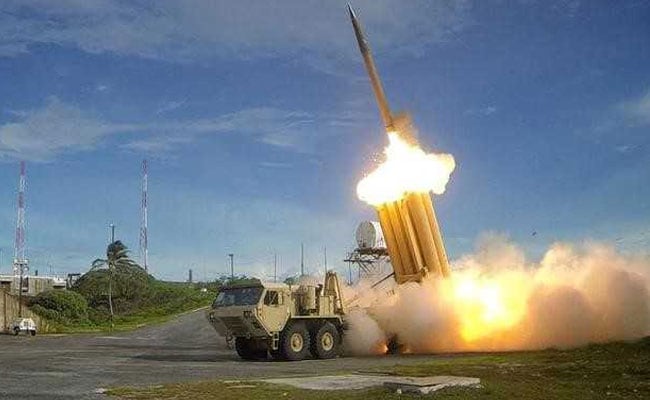 Another US defensive system in Europe could reassure NATO allies in southern Europe. (Reuters)

Berlin: The US military has held preliminary discussions about moving a powerful missile defence system to Germany to boost European defences, according to two sources familiar with the issue, a move that experts said could trigger fresh tensions with Moscow.

The tentative proposal to send the Terminal High Altitude Area Defense (THAAD) system to Europe predates US President Donald Trump's decision to withdraw from the 2015 Iran nuclear accord, and comes amid a broader push to strengthen Europe's air and missile defences.

While Europe and the United States are at odds over the fate of the nuclear agreement, they share concerns about Iran's continued development of ballistic missiles.

Iran's Shahab 3 missiles can already travel 2,000 km, enough to reach southern Europe, and its Revolutionary Guards have said they will increase the range if threatened since the range is capped by strategic doctrine, not technology constraints.

US European Command has been pushing for a THAAD system in Europe for years, but the U.S. withdrawal from the Iran nuclear accord has added urgency to the issue, said Riki Ellison, head of the non-profit Missile Defense Advocacy Alliance.

A senior German military official cited the need to add more radars across Europe to better track and monitor potential threats, and cue interceptors if needed.

The US Defense Dept said no such action had been decided.

"There are currently no plans to station THAAD systems in Germany. We do not discuss potential future military planning, as we would not want to signal our intent to potential adversaries. Germany remains among our closest partners and strongest allies," said Pentagon spokesman Eric Pahon.

Deploying another US defensive system to Europe could reassure NATO allies in southern Europe already within striking range of Iran's missiles, said one military official from that region.

Talk of deploying a THAAD system in Europe also comes against the backdrop of rising tensions between the West and Russia.

NATO has long insisted that its missile defence programme is not directed at Russia, but the alliance has adopted a tougher tone toward Moscow in the wake of the poisoning of a Russian former spy in England.

Moscow denies any involvement in the poisoning, and blames the tensions on NATO's military expansion eastward, and its assembly of a ballistic missile shield with a key site in Romania that was declared combat-ready in 2016.

Moving THAAD to Germany could plug a radar gap caused by a two-year delay in completion of a second Aegis Ashore missile defence site in Poland that was initially due to open this year.

The issue may be raised in a new Pentagon missile defence review expected in early June.

The review may draw a closer connection between missile defence and a need to deter Russia that was highlighted in the new US national defence strategy, said Tom Karako, senior fellow at the Center for Strategic and International Studies.

One US military official said there had been preliminary talks with German military officials on moving a THAAD system to Ramstein Air Base in Germany, headquarters for the US Air Force in Europe and NATO Allied Air Command.

"It would be a further political message to the Europeans that we're serious about protecting our allies," said the official. "The initial assessment is that Germany would very likely not have a problem with a THAAD deployment," US General Curtis Scaparrotti, head of U.S. European Command, last week said he was seeking more troops and equipment to deter Russia, but declined further comment.

A second source said German officials were open to the move as a way to better protect civilian populations.

The German defence ministry is working to rebuild its own short- and medium-range missile defences after years of cuts.

Starting later this year, it also plans to review territorial missile defence needs in a conceptual study that will also look at THAAD and the Arrow 3 anti-missile system built by Israel and the United States, a spokesman said.

The German foreign ministry, which oversees foreign troops stationed in Germany, said it could not confirm sending any signals about a possible THAAD deployment to the United States.

Washington does not need Germany's permission to move such equipment under existing basing contracts, but the sources said a formal notification would be sent before any move to proceed.

(Except for the headline, this story has not been edited by NDTV staff and is published from a syndicated feed.)
Comments
Germanymissile systemsUSA