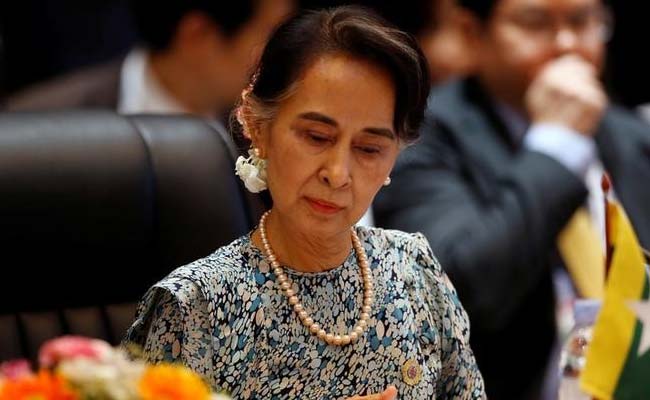 Obama hailed a "remarkable" transformation in the country also known as Burma, which spent five decades under oppressive military rule. Suu Kyi's party swept historic elections last November, and the visit by the 71-year-old Nobel Peace Prize laureate, deeply respected in Washington, is a crowning occasion in the Obama administration's support for Myanmar's shift to democracy, which the administration views as a major foreign policy achievement.

The US has eased broad economic sanctions since political reforms began five years ago but has retained more targeted restrictions on military-owned companies and dozens of officials and associates of the former ruling junta. US companies and banks have remained leery of involvement in one of Asia's last untapped markets.

"The United States is now prepared to lift sanctions that we have imposed on Burma for quite some time," Obama said as he sat alongside Suu Kyi in the Oval Office. He said it was "the right thing to do" to ensure Myanmar benefits from its transition. Asked by a reporter when sanctions would be lifted, Obama said "soon."

Suu Kyi concurred it was time to remove all the sanctions that she said had hurt the country economically as it was now in a position to open up to investment. She said she wants Americans to come to the country and "to make profits."

Congressional aides said that Suu Kyi requested the removal of the national emergency with respect to Myanmar - the executive order authorizing sanctions that has been renewed annually by US presidents for two decades. She did so at a breakfast meeting earlier Wednesday with Vice President Joe Biden and congressional leaders.

A US official said that by terminating the emergency, 111 Myanmar individuals and companies will be dropped from a Treasury blacklist and restrictions will be lifted on new investment with the military and on the imports of rubies and jade.

The official and aides spoke on condition of anonymity as they were not authorized to discuss the matter publicly.

The change in policy will not remove all economic sanctions. Penalties intended to block the drug trade and to bar military trade with North Korea would still apply, as would a visa ban barring some former and current members of the military from traveling to the US
Nor does the move does not normalize relations with Myanmar's military. The U.S. does not intend to provide weapons, military equipment or other support for the military, the official said.

Rohingya Muslims remain displaced by sectarian violence and denied citizenship. The military and associates who profited under junta rule still have huge stakes in the economy.

Transparency watchdog Global Witness reported last year that Myanmar's jade industry is worth nearly half of the nation's economic output and remains firmly in the grip of military elite, U.S.-sanctioned drug lords and crony companies. The jade is mined in a region of northern Myanmar still plagued by civil conflict.

Suu Kyi said that Myanmar had reached a point that it had not expected to reach, but acknowledged, "There's so much that has to be done in our country."

She said top priority was national reconciliation. She also addressed the situation in western Rakhine state, where more than 100,000 Rohingyas remain stuck in camps, separated from Buddhists, who are the majority in Myanmar. She said everyone entitled to citizenship in Myanmar should get it.

"We are sincere in trying to bring together the different communities," Suu Kyi said.

The White House notified Congress on Wednesday it was offering preferential trade benefits to Myanmar that were suspended in 1989, a year after the bloody crackdown on democracy protesters by the military. The US had cited Myanmar's refusal to recognize workers' rights. The benefits will be reinstated as of November, following a review that includes whether the country is trying to improve conditions for workers, according a statement issued by the US trade representative.

Suu Kyi's visit to Washington signals her transformation from long-imprisoned heroine of Myanmar's democracy struggle to a national leader focused on economic growth.

She last visited Washington in 2012 when she was still opposition leader. On that occasion, she was presented with the Congressional Gold Medal, the legislature's highest civilian honor, which she had been awarded in 2008 while under house arrest.

She met Obama on Wednesday as the de facto leader of the country with the title of state counsellor although a junta-era constitution still enshrines the military's role in politics and bars her from the presidency. When Obama visited Myanmar in November 2014, he voiced support for constitutional reform.

White House spokesman Josh Earnest pushed back on the notion the US was undercutting its leverage over Myanmar on human rights and constitutional reforms by lifting sanctions.

Promoted
Listen to the latest songs, only on JioSaavn.com
"If anything, we're enhancing it," Earnest said, adding that greater US engagement would increase its ability to promote further changes in Myanmar.