US Leaves "High-Value" ISIS Detainees Behind In Syria: Report

Citing two American officials, the US-based newspaper reported that the detainees could not be taken out before the Pentagon decided to move its forces out of northern Syria. 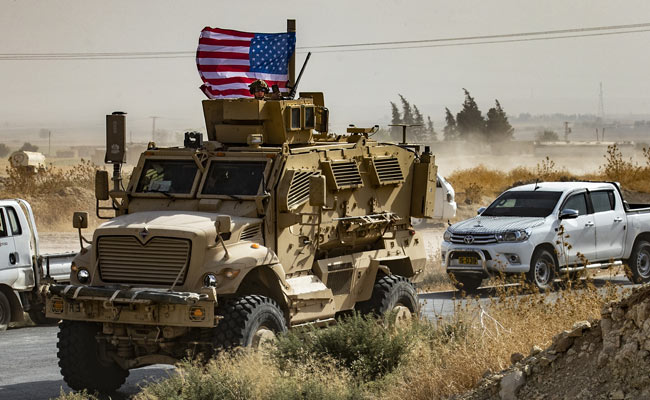 US has move its forces out of northern Syria

The American military was unable to carry out a plan to transfer about five dozen "high value" ISIS (Islamic State) detainees out of Kurdish-run wartime prisons, The New York Times (NYT) reported on Sunday.

Citing two American officials, the US-based newspaper reported that the detainees could not be taken out before the Pentagon decided to move its forces out of northern Syria.

The report comes even as the Turkish offensive in the region is underway in Syria with many expressing apprehensions that the move could lead to the resurgence of ISIS.

NYT in its report said that hundreds of ISIS sympathizers escaped from a low-security detention camp in the region.

Ankara is facing increasing international condemnation for a military offensive in Syria with many appealing to it to stop the onslaught. France has stopped arms sales to Turkey over its offensive in the region.

This comes even as the Kurdish administration in northern Syria announced a deal with the Damascus government on a Syrian troop deployment near the border with Turkey to confront Ankara's offensive.

"In order to prevent and confront this aggression, an agreement has been reached with the Syrian government, so that the Syrian army can be deployed along the Syrian-Turkish border to assist the Syrian Democratic Forces (SDF)," Al Jazeera said that the Kurdish administration was quoted saying it on its Facebook page.