With Trump's address set for January 29, Nancy Pelosi wrote him a letter citing security concerns because the Secret Service, which is required to provide security for the address, has not received funding during the dispute. 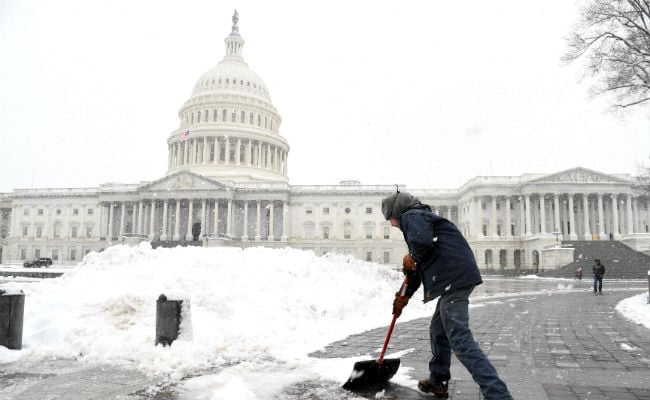 The US government shutdown was triggered by Trump's demand for $5.7 billion to fund a border wall

With the partial US government shutdown now in its 26th day, House Speaker Nancy Pelosi on Wednesday urged President Donald Trump to reschedule his State of the Union address - a move that could deny him the opportunity to use the pageantry of the speech to attack Democrats in their own chamber over the impasse.

With Trump's address set for January 29, Pelosi wrote him a letter citing security concerns because the Secret Service, which is required to provide security for the address, has not received funding during the dispute.

The standoff was triggered by Trump's demand for $5.7 billion to fund a wall along the US-Mexico border, which Democrats oppose.

Presidents traditionally deliver the address, which lays out the administration's goals for the upcoming year, in the House of Representatives chamber before a joint session of Congress and the majority of the Cabinet.

Democrats took control of the House after last November's congressional elections. During the shutdown, Trump has routinely blamed them for the stalemate, although he had earlier said he would take responsibility.

Pelosi, speaking to reporters, suggested that if Trump would not agree to reschedule the speech until the government reopens, he could deliver it from the Oval Office instead, a setting that would lack the grandeur of a congressional address.

The White House had no immediate comment on Pelosi's request, and her letter appeared to have taken aides by surprise. It pointed out that she had invited Trump to make the State of the Union address at the Capitol but said the shutdown complicated the situation.

"Sadly, given the security concerns and unless government re-opens this week, I suggest we work together to determine another suitable date after government has re-opened for this address or for you to consider delivering your State of the Union address in writing to the Congress," Pelosi wrote.

US Senate Democratic leader Chuck Schumer told reporters later: "I think it's a good idea to delay (the speech) until the government is open."

Homeland Security Secretary Kirstjen Nielsen said on Twitter her department and the Secret Service were prepared to handle a presidential speech at the Capitol.

Representative Jim Jordan of the House Freedom Caucus, a group of conservative Republicans allied to Trump, said Pelosi's move showed Democrats were "more focused on stopping the president than they are on serving the country."

Both sides sought to ratchet up the pressure over the longest government shutdown in US history.

Democratic senators huddled on the outdoor steps leading to the Senate in 39-degree (3.9-C) weather, holding large photographs of constituents furloughed by the shutdown or otherwise hurt by it, with Schumer saying Trump "is using these men and women as pawns."

At the same time, the president hosted a bipartisan group of House members to discuss finding a solution to the impasse. White House Press Secretary Sarah Sanders said the meeting was constructive.

Democratic lawmakers who met with Trump said they told him to end the shutdown first and then talk about the issues dividing them.

"Our singular message was we've got to reopen the government and then in good faith we can have negotiations," Representative Dean Phillips told reporters.

At mid-afternoon, a group of freshman House Democrats crossed the Capitol to deliver a letter to Republican Senate Majority Leader Mitch McConnell's office, "asking him to exercise his power and bring our bills to a vote" to fund the government and reopen it, said Representative Susie Lee of Nevada.

A handful of Republican senators, including Lindsey Graham and Lisa Murkowski, were circulating a bipartisan draft letter to Trump asking him to support a measure that would reopen the government for three weeks while they work on funding legislation that would address his concerns about border security.

A Democrat who signed the letter, Chris Coons, said it would not be sent unless a substantial number of Republicans signed it.

Trump on Wednesday signed legislation that would ensure 800,000 federal employees will receive back pay when the government reopens.

But the White House threatened to veto a House bill that would provide $12.1 billion in supplemental funding for national disasters if lawmakers combined it with a separate measure to temporarily reopen shuttered agencies without funding for a border wall, saying such a move would be "unacceptable."

Some government employees are being asked to return to work after being initially told to stay home during the shutdown, although they will not be paid on schedule.

Funding for the federal courts will run out next week because of the shutdown, Bob Carlson, president of the American Bar Association, which represents more than 400,000 lawyers, said on Wednesday, urging the administration and Congress to reach a compromise and restore funding to the federal judiciary.

"Immigration courts, which have no current funding and are already dealing with an 800,000-case backlog, have canceled more than 42,000 hearings, forcing people who have waited years for justice to wait even longer," Carlson said in a statement.