The committee had been expected to approve two articles of impeachment late on Thursday, setting up a vote by the Democratic-controlled House next week that is expected to make Trump the third president in U.S. history to be impeached. 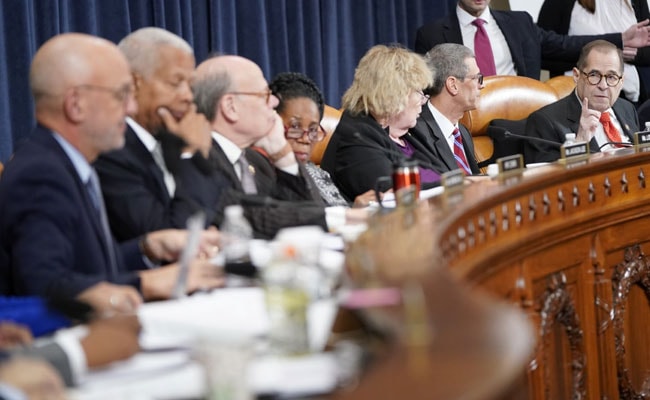 If the House impeaches Donald Trump, he would then go on trial in the Senate (Reuters)

U.S. lawmakers will vote on Friday whether to move forward with impeaching Republican President Donald Trump, as the Democratic head of the Judiciary Committee shocked Republicans by declining to hold a late-night vote after a hearing that lasted more than 14 hours.

The committee had been expected to approve two articles of impeachment late on Thursday, setting up a vote by the Democratic-controlled House next week that is expected to make Trump the third president in U.S. history to be impeached.

Instead, as the clock ticked toward midnight, Judiciary Committee Chairman Jerry Nadler sent lawmakers home for the night and said members would return to vote on Friday at 10 a.m. ET (1500 GMT).

The scheduling appeared to have nothing to do with the substance of the impeachment fight, but it incensed Republican leaders who said afterward many were planning travel home on Friday and would now have to reset their schedules.

Doug Collins, the top Republican on the panel, appeared shocked by the announcement and immediately reacted with anger at his Democratic counterpart for not consulting with him before rescheduling.

"This was the most bush league thing I have seen, forever," Collins told reporters. "This committee is more concerned about getting on TV in the morning than it was finishing its job tonight and letting the members go home. Words cannot describe how inappropriate this was."

Democrats had expected to wrap up the hearing early in the evening, but Republicans, led by Collins, proposed a series of amendments that had no hope of passage.

Republicans offered hours of remarks on their amendments, frequently repeating the same prepared commentary and often veering into other topics that ranged from natural gas drilling to the state of the economy.

If the House impeaches Trump, who is charged with abuse of power and obstruction of Congress, he would then go on trial in the Senate. The Republican-led chamber is unlikely to vote to find the president guilty and remove him from office.

The House Judiciary Committee proceedings ground on through the afternoon and into the evening as Republicans, determined to stretch out the meeting, offered a series of amendments that would emasculate the articles of impeachment but had no hope of adoption.