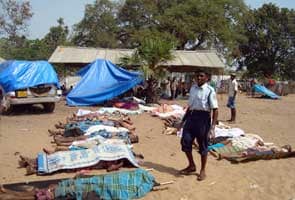 Washington: The US is going ahead with its resolution against Sri Lanka at the UN Human Rights Council in Geneva as the Rajapaksa government has failed to fulfill its international obligations, which it promised after the fall of the LTTE, the Obama Administration said.

Without naming any one, State Department spokesperson Victoria Nuland, on Monday, told reporters at her daily news conference that the US is working with a lot of governments who share its concerns about the lack of progress in Sri Lanka.

"It is not a surprise to the government of Sri Lanka that we are doing this. We made clear publicly and privately that this was a response to the fact that we just didn't see the kind of movement that was necessary.

We didn't see promises fulfilled. So we're being very transparent with the government of Sri Lanka and we're expecting strong support for the resolution that we've put forward," Ms Nuland said.

"I remember when the (Sri Lankan) Foreign Minister was here last year and met with (the then) Secretary (of State, Hillary) Clinton, she made clear that if we didn't have progress, we would go forward, and that's what we've done," she said.

The Sri Lankan government needs to fulfill its promise and international obligations, she said when asked about the views of the critics of the American resolution that this would boost the morale of pro-LTTE groups in the country and the world over.

"The best thing that the government of Sri Lanka could do for its own people and to undercut the claims of these groups would be to fulfill the obligations that it made to the international community to take the process forward. So that hasn't happened and we are taking more measures in the Human Rights Council to make clear that progress has been insufficient," Ms Nuland said.

Promoted
Listen to the latest songs, only on JioSaavn.com
The US had adopted a similar resolution last year with India's support which bound Sri Lanka to make rapid progress on reconciliation with Tamils.

Sri Lankan forces had crushed LTTE in May 2009 after nearly three decades of brutal fighting. The conflict claimed up to 1,00,000 lives, according to UN estimates, and both sides are accused of war crimes.