Astronaut Kate Rubins and NASA described the process as a form of absentee voting. 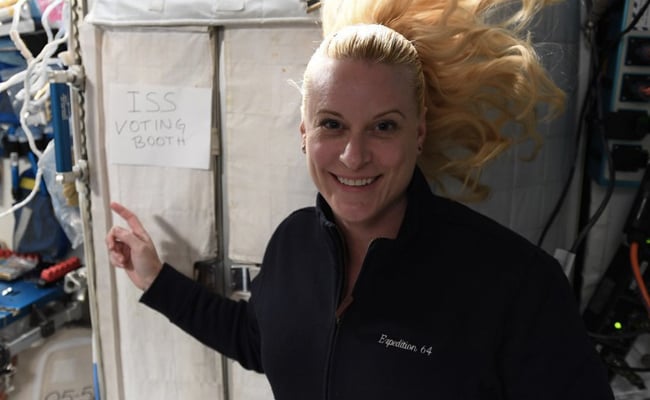 Kate Rubins filled out the ballot in the mail, it was downlinked and delivered back to the clerk's office

At least she didn't have to wait in line.

A US astronaut cast her ballot from the International Space Station on Thursday, making her voice heard in the presidential election despite being 253 miles (408 kilometers) above the Earth.

The post featured a photograph of Rubins, her blonde hair floating in the zero-gravity environment, in front of a white enclosure with a paper sign that reads "ISS voting booth."

From the International Space Station: I voted today

Rubins and NASA described the process as a form of absentee voting.

A secure electronic ballot generated by a clerk's office in Harris County, home of NASA's Johnson Space Center in Houston, Texas, was sent up via email to the ISS.

Rubins filled out the ballot in the email and it was downlinked and delivered back to the clerk's office.

She is no stranger to the process: Rubins cast her vote from the ISS during the 2016 election. Congress passed legislation in 1997 that made voting from space possible.

"We consider it an honor to be able to vote from space," she said in a video before she and two Russian cosmonauts launched from the Russian-operated Baikonur cosmodrome in Kazakhstan on October 14.

Three other American astronauts were also expected to vote from space but their October 31 trip to the ISS was delayed.