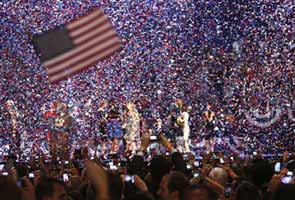 Los Angeles: The US presidential election became the most-searched item and Kim Kardashian was the most-searched person on Yahoo! in a year when online searches were dominated by big news stories and pop culture obsessions, the search engine company said on Monday.

The search term "election" topped the list of searches, led not only by extensive media coverage but also widening conversation on online social media platforms.

The term "political polls" was No. 8 of the top 10 Yahoo! searches of the year.

"The 2012 elections dominated the online searches, which is amazing because if something is in the news, it's already accessible ... people were really saturated by it, but even so, that was a key word that people typed throughout the year," Vera Chan, Yahoo!'s web trend analyst, said in a conference call.

Chan said only two other news stories have topped the list in the past decade, those being the death of Michael Jackson in 2009 and the BP oil spill in 2010.

"iPhone 5" came in at No. 2, which Chan said was interesting "in a post-Steve Jobs era" because while Apple Inc's iPhone has featured regularly in the top searches since the first generation emerged in 2007, this was the first time a specific model had appeared high on the list.

Reality star Kim Kardashian was the most-searched person on the website, coming in at No. 3 and leading six famous women in the top 10.

Chan said Kardashian's "notoriety has kept her at the top," citing her ongoing divorce saga with ex-husband Kris Humphries, her high-profile relationship with rapper Kanye West and her E! channel reality shows.

Middleton, who was followed eagerly by fans and critics in her first year as a royal married to Britain's Prince William and being a staple at the London Olympics and the Queen's Diamond Jubilee, also garnered the most-searched scandal of the year when a French magazine published photos of her topless.

"olympics" came in at No. 7 on the list, as many turned to online media to watch and keep tabs on the global sporting event held in London during the summer.