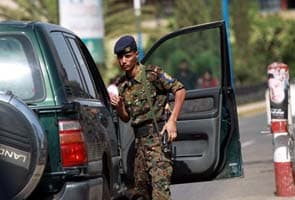 Aden: Al Qaeda in Yemen was hit by a fresh strike today from a US drone which left seven militants dead, tribal sources said, a day after Washington pulled its diplomats from the country fearing an attack by the jihadists.

The early-morning strike in Yemen's southern Shabwa province destroyed two vehicles, the sources said. Those who died were all members of Al-Qaeda in the Arabian Peninsula(AQAP).

"The shell left the cars and the militants inside in pieces," one source said of the attack in the town of Nasab.

Wednesday's raid was the fifth of its kind since July 28, with at least 24 suspected Al Qaeda militants killed in the strikes.

Washington at the weekend closed 19 embassies and consulates in the Middle East and Africa, citing intercepted communications among militants, reportedly including an attack ordered by Al Qaeda leader Ayman al-Zawahiri.

On Tuesday, the US and its allies pulled staff out of their embassies in Yemen and stepped up security at missions across the Middle East amid fears of an imminent attack.

While the closures span cities across the Arab world, the focus of concern has been Yemen, where American forces are fighting a drone war against Al Qaeda's powerful regional affiliate.

According to media reports, the trigger for the pullback came when US intelligence intercepted messages between Zawahiri and Nasir al-Wuhayshi, the leader of AQAP.

The New York Times said the electronic communications revealed Zawahiri had ordered AQAP to carry out an attack as early as last Sunday.

AQAP is seen as the global Islamist militant network's most capable franchise following the decimation of Al-Qaeda's core leadership in Afghanistan and Pakistan in recent years.

Yemeni authorities beefed up security in Sanaa, where they feared the attack would be launched.

A Yemeni security official who requested anonymity told AFP that fears are that car bombs would be used in the attacks.

"Security services are in a race against time to prevent attacks in the capital," the official said.

Tightened security measures in Sanaa were not only around Western missions but also around main government buildings in the capital, the official added.

The Yemeni government has issued a strong response to the diplomatic withdrawal, saying it recognised the safety fears but that the pullout "serves the interests of the extremists".

Such a step "undermines the exceptional cooperation between Yemen and the international alliance against terrorism," the foreign ministry in Sanaa said.

Local authorities had "taken all necessary precautions to ensure the safety and security of foreign missions," it stressed.

The Yemen-based AQAP has attempted several attacks on the United States, including a failed bid to bring down a passenger plane by a man wearing explosives in his underwear and another to send bombs concealed in printer cartridges.

Washington has launched scores of drone strikes in Yemen, where the militant group thrives in vast, lawless areas largely outside the government's control.

Yemen has listed the names of 25 Al Qaeda suspects wanted in connection with an alleged plot to launch a major attack before Ramadan ends and the Eid al-Fitr feast begins on Thursday.

One of those on the list, Saleh al-Tays al-Waeli, was killed in a drone strike on Tuesday.

Promoted
Listen to the latest songs, only on JioSaavn.com
Yemen has offered a five million rial reward (about $23,000) for information that could lead to the arrest of any member of the group, the defence ministry's news website 26sep.net reported.