US Defence Secretary Dismisses Disagreement With Trump On North Korea

President Trump on Wednesday implied that diplomacy with North Korea is over, tweeting that "talking is not the answer". 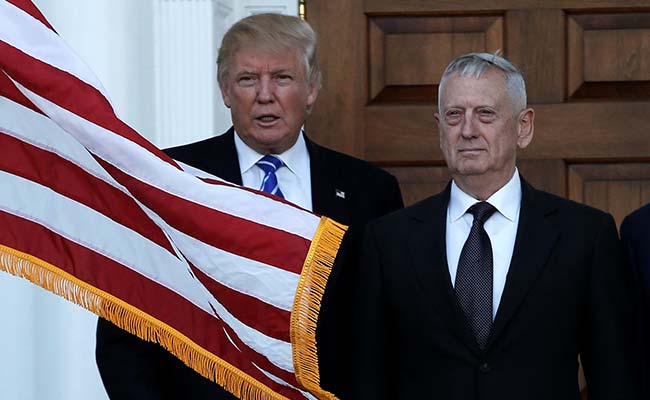 Washington: US Defence Secretary Jim Mattis has refuted claims that he disagrees with President Donald Trump on the best strategy to handle tensions with North Korea, saying his comments were "widely misinterpreted".

President Trump on Wednesday implied that diplomacy with North Korea is over, tweeting that "talking is not the answer".

When asked about the tweet hours later, Mr Mattis seemed to disagree, saying that "We are never out of diplomatic solutions".

But, yesterday, Mr Mattis stressed that there was "nothing contradictory there" and said reports have "widely misinterpreted" his comments.

"I was asked if there are any diplomatic efforts. And I said, Of course. And diplomatic can include economic sanctions, United Nations, not just talking. It didn't contradict anything the President said. We're not talking to the North Koreans right now. It was widely misinterpreted. I can't help people who misinterpret things," he said.

Tensions with North Korea have been high all month as the regime has conducted a series of provocative missile tests and President Trump threatened to confront North Korean threats.

"I agree it was a reckless, provocative act, firing that over Hokkaido. We were watching what they were doing, but I did not know what, in fact, they were thinking, whether or not they were really throttling back or not," he said.

Promoted
Listen to the latest songs, only on JioSaavn.com
"We will defend ourselves and our allies," he said.

Responding to a question, Mr Mattis said North Korea could do something like that (nuclear test) on a relatively short notice.