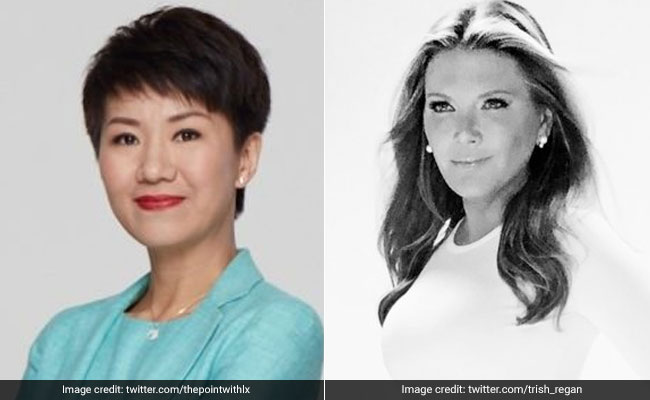 On camera, the tone was much different, ending with a friendly exchange.

With the US-China trade talks on hold, thousands of Chinese viewers, media and even economists tuned in to watch CGTN host Liu Xin take on Fox Business Network presenter Trish Regan in the rare debate.

China's state media had drummed up interest in the showdown in recent days with articles and social media posts, and even China's foreign ministry chipped in to encourage viewing.

The verbal spat erupted when Liu, host of "The Point", took offence to a description of China in the Trish Regan Primetime show, but while the anchors went after each other on Twitter, the on-air face-off was more diplomatic.

Chinese viewers were left angry when the "debate" turned more into civil interview between host Regan and her guest, with some baulking at the American talk-show style and bashing Regan for repeatedly cutting off Liu.

Regan had Liu backpedalling from the start, welcoming her on the show by claiming she spoke for China's ruling Communist Party -- a charge which Liu vehemently disputed.

"When you're debating with Americans, you can't be a polite woman following in their footsteps, when dealing with barbarians you must adopt a barbarian-like attitude, otherwise you'll suffer," wrote one viewer on Twitter-like Weibo.

Regan's interruptions climbed to the top of trending topics on the platform.

CGTN refrained from running the segment live, claiming rights issues, but many Chinese appeared to watch it via internet streaming.

"The so-called war of words was over in a quick 15 minutes, and to sum it up, Liu Xin dished out some stuff from our high school politics textbook," said one man on WeChat.

"Effective exchange of opinions between China and the United States is difficult and it's better to have an attempt like this than nothing at all," Hu wrote on Weibo.

The two anchors found some common ground on intellectual property theft -- a key issue in the trade dispute as Washington accuses China of stealing US know-how.

"I do not deny that there are IP infringement, there are copyright issues or there are piracy or even theft of commercial secrets," Liu told Regan.

"I think that is something that has to be dealt with."

To Regan's question about China's state capitalism economic model, Liu retorted: "We would like to define it as socialism with Chinese characteristics where the market, where market forces are expected the play the dominating or the deciding role in the allocation of resources."

"Hey #China State TV - let's have an HONEST debate on #trade. You accuse me of being 'emotional' and not knowing my facts - wrong! You name the time and place, and I'll be there!" Regan tweeted last week.

Liu took her on: "I hear you. Will get back to you very soon. But I don't want to play any mud throwing game, if that's what you prepare to do."

On camera, the tone was much different, ending with a friendly exchange.

"If you want to come to China, you're welcome, and I'll take you around. Thank you, Trish, for the opportunity," Liu ended.