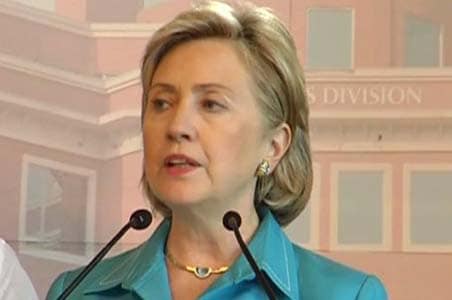 Islamabad: The US can "just encourage" India and Pakistan to resume their stalled composite dialogue but it "cannot dictate solutions," Secretary of State Hillary Clinton said in Islamabad on Friday.

Clinton, who was on a three-day official visit to Pakistan, stated this during an interaction with women civil society leaders.

Her remarks came a day after she appealed to India and Pakistan to resolve their differences for the benefit of regional trade and economic development.

"What we hope is that at some point in the future - which I would like to see in the not too distant future - Pakistan and India can resolve their outstanding differences," Clinton said in Lahore on Thursday during a function.

Promoted
Listen to the latest songs, only on JioSaavn.com
Clinton had on Thursday also made it clear that while the US encouraged both countries to address their problems, only Pakistan and India could resolve such issues.

India suspended the composite dialogue process after the Mumbai attacks in November last year, which it blamed on Pakistan-based Lashkar-e-Toiba. It wants Pakistan to take action against perpetrators of the attacks for resumption of the talks.
Comments
IndisPakistantiesHillary ClintonUS