Acting FDA commissioner Janet Woodcock described the move as a "significant step in the fight against the Covid-19 pandemic." 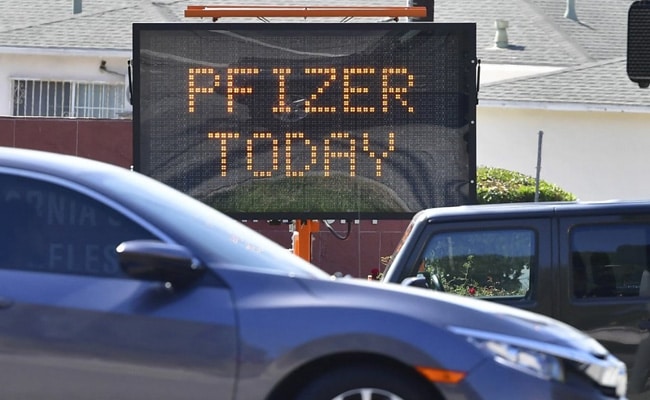 The FDA previously authorised the Pfizer vaccine to individuals aged 16 and older.

The United States on Monday authorized the Pfizer-BioNTech Covid-19 vaccine for children aged 12 to 15 years old, while the devastating outbreak in India raged on.

The US Food and Drug Administration previously had granted an emergency use authorization for the jab to individuals aged 16 and older.

"This is a promising development in our fight against the virus," said President Joe Biden.

But the World Health Organization in Geneva warned the B.1.617 variant spreading in India appears to be more contagious, classifying it as a "variant of concern at the global level."

The virus is still surging in many countries and the pandemic has killed close to 3.3 million people worldwide since late 2019, upending normal life and causing global economic chaos.

Rapid vaccination programs, however, have allowed a number of wealthy nations to start taking steps towards normality.

The head of the European Medicines Agency said Monday that BioNTech/Pfizer's jab against Covid-19 soon could be approved for 12- to 15-year-olds in the EU, as well, perhaps as early as this month.

Ireland on Monday lifted domestic travel restrictions and began a phased reopening of non-essential retailers, while Greece opened nursery, elementary and middle schools ahead of kicking off the tourist season from May 14.

Tourism might get a shot in the arm from the European Union, which said it was "fully on track" to ensure a Covid health pass would be ready in June to boost travel.

Britain, which has the highest Covid-19 death toll in Europe, announced the reopening of indoor seating in pubs and restaurants in England from next week.

Spain, which at the weekend lifted a six-month state of emergency and allowed travel between regions, sounded a note of caution after joyful crowds celebrated in the streets without masks or social distancing.

"I hope this is a new beginning and that we won't stop again after these sad months of silence," said first violinist Laura Marzadori, smiling broadly.

And in Germany, people fully vaccinated against Covid-19 were exempt from many restrictions from Sunday after the government passed new legislation.

Berlin also opened access to the single-shot Johnson & Johnson vaccine to all adults on Monday, lifting a priority system.

But in Norway, an expert government committee recommended the Johnson & Johnson and the AstraZeneca jabs be dropped over the risks of rare but serious side effects.

Meanwhile, German firm BioNTech, which developed a vaccine with US pharma giant Pfizer, announced a $200 million joint venture with China's Shanghai Fosun Pharmaceutical to produce up to one billion jabs a year and said it was building its own Southeast Asia manufacturing site in Singapore.

India, suffering from one of the worst outbreaks in the world, reported nearly 370,000 fresh infections and more than 3,700 new deaths on Monday.

The devastating wave has overwhelmed India's healthcare system, and experts have said official figures for cases and fatalities are much lower than the actual numbers.

BioNTech on Monday sought to allay fears around the mutation in India, saying that "to date, there is no evidence" that the jab needs to be adapted to fight the emerging variants.

The outbreak has spread to some of India's neighbors, including Nepal.

China announced plans to set up a "separation line" on the summit of Mount Everest -- which straddles the China-Nepal border -- to avoid infections by climbers from Nepal, where dozens have been taken ill at base camp, state media reported.

Glimpse of the future?

The world got a glimpse of post-pandemic life as Tokyo hosted a test event ahead of the Summer Olympic Games.

But International Olympic Committee chief Thomas Bach was forced to postpone a visit to Japan after a coronavirus state of emergency was extended.

The United States remains the worst-hit nation in the world, with the highest number of known fatalities and infections.

But the real death toll may be higher than the official figure of 581,000, with a University of Washington study released last week estimating deaths at more than 900,000.

New infections have come down since January as more than 114 million people have been fully vaccinated through the country's ambitious vaccine rollout.

But US biotech firm Novavax said Monday it had delayed plans to seek authorization for its Covid vaccine candidate, a setback for developing countries hoping the injection would soon be available through the Covax program.