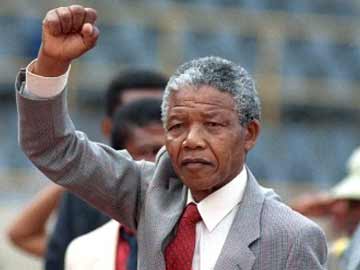 The UN General Assembly has established an award in the honour of anti-apartheid icon
Nelson Mandela as a tribute to his achievements and contributions.

"Our best tribute to Nelson Mandela is not found in words or ceremonies - but in actions that take up the torch he passed to us," Secretary-General Ban Ki-moon said in remarks to the Assembly, following the adoption by consensus of the resolution establishing the 'United Nations Nelson Rolihlahla Mandela Prize'.

The General Assembly has a proud record of acting against apartheid - and for Mr Mandela, Ban said.

"From the early days of sanctions to the more recent declaration of July 18 as Nelson Mandela International Day, the Assembly has placed itself on the right side of history -with the people who need us most," he said.

"When Nelson Mandela himself accepted the Nobel Prize, he said he was a representative of the countless human beings who recognised that an injury to one is an injury to all and therefore acted together in defence of justice and a common human decency," Ban said.

"Mandela embodied this altruistic spirit of solidarity. The United Nations will forever be inspired by his example," the Secretary-General added.

By terms of the resolution, the Assembly asked the Secretary-General, in consultation with the President of the Assembly, to establish within six months of adoption of the text the criteria and procedures for bestowing the prize.

This is to be adopted by the Assembly no later than November 2014.

Promoted
Listen to the latest songs, only on JioSaavn.com
Mr Mandela, who became South Africa's first black president after the first all-race polls in 1994, died on December 5 last year at the age of 95 after battling a protracted illness.