The escalation came as pro-government forces were also expected to enter the northern Kurdish-controlled enclave of Afrin, to take a stand against a month-old Turkish assault.

The united nations wants an end to civilian suffering in Syria, after another attacked killed 100 (File)

Hammuriyeh, Syria: The UN has demanded an end to the targeting of civilians in Syria after a heavy bombardment killed at least 100 civilians in rebel-held Eastern Ghouta, as regime forces appeared to be preparing for an imminent ground assault.

The escalation came as pro-government forces were also expected to enter the northern Kurdish-controlled enclave of Afrin, to take a stand against a month-old Turkish assault.

Held by rebels since 2012, Eastern Ghouta is the last opposition pocket around Damascus and President Bashar al-Assad has deployed reinforcements in an apparent concerted effort to retake it.

As a barrage of air strikes, rocket fire and artillery slammed into several towns across Eastern Ghouta on Monday, the United Nations warned that the targeting of civilians in Eastern Ghouta "must stop now".

"It's imperative to end this senseless human suffering," Panos Moumtzis, the UN's Regional Humanitarian Coordinator for the Syria Crisis said.

The Britain-based Syrian Observatory for Human Rights said at least 100 civilians, 20 of them children, were killed in the bombardment, the highest death toll in the enclave since early 2015.

"The regime is bombing Eastern Ghouta to pave the way for a ground offensive," said Observatory head Rami Abdel Rahman.

The main opposition National Coalition, which is based in Turkey, denounced the "war of extermination" in Eastern Ghouta as well as the "international silence".

It also accused regime ally Russia of seeking to "bury the political process" for a solution to the conflict.

An AFP correspondents saw residents of Hammuriyeh rushing indoors in panic at the first sound of jets.

"Ghouta's fate is unknown. We've got nothing but God's mercy and hiding out in our basements," he told AFP.

Shelling also hit the town of Douma, where an AFP correspondent saw five toddlers brought to a hospital, covered in dust and wailing uncontrollably.

The hospital was full of distraught civilians -- one father slapped his forehead after finding his two dead children.

Most of Eastern Ghouta is held by two Islamist factions, while jihadists control small pockets including one directly adjacent to the capital.

The Observatory and Syrian daily newspaper Al-Watan had said negotiations were under way for the evacuation of jihadists from Eastern Ghouta. 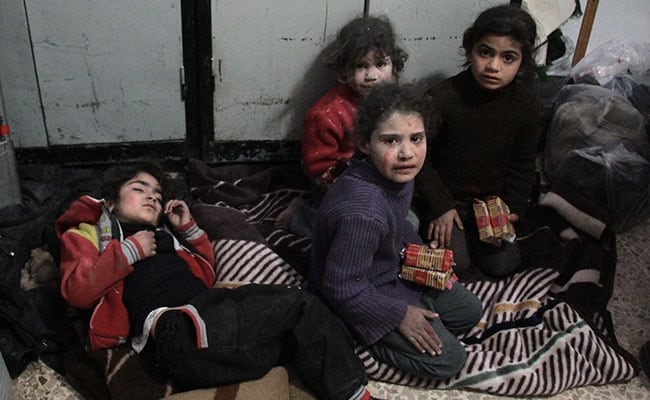 But the escalating bombardment suggests the regime might opt for a ground assault instead, the monitor said.

Government troops carried out a relentless five-day bombing campaign on the enclave earlier this month that killed around 250 civilians and wounded hundreds.

After days of relative calm, the government sent more than 260 rockets crashing into the enclave on Sunday.

The regime is keen to regain control of the area to halt deadly rebel rocket and mortar fire into Damascus.

About half a dozen rockets hit the capital on Sunday night, AFP correspondents said.

State news agency SANA reported that one person was killed. More than 20 civilians have been killed by rebel fire this month alone in regime-held Damascus.

All was quiet in the capital on Monday but since rumours of an imminent assault on Eastern Ghouta started spreading, people living close to the rebel enclave started packing their bags.

Jawad al-Obros, 30, said he was looking to move to a hotel in the western sector of the city to escape his home in an east Damascus neighbourhood that has been regularly hit by rockets from Ghouta.

"We're tired of this situation. It seems that there's no solution but a full-blown military one," he told AFP.

More than 340,000 people have been killed since the civil war erupted in 2011 after protests against Assad's government were brutally crushed.

It has since evolved into a war that has carved up the country into rival zones of control among the regime, rebels, jihadists and Kurdish forces.

The Kurdish People's Protection Units (YPG) control the northwestern region of Afrin, target of a month-old assault by the Turkish army and allied Syrian rebels.

Ankara sees the YPG as a "terror" group linked to the Kurdistan Workers Party (PKK), which has waged a deadly insurgency in southeastern Turkey since 1984.

The YPG has controlled Afrin since 2012, when Syrian troops withdrew from it and other Kurdish-majority areas.

Syrian state media said Monday that pro-regime forces were preparing to enter the area to "join the resistance against the Turkish aggression".

Turkish Foreign Minister Mevlut Cavusoglu warned against any intervention in support of the YPG, saying it would not prevent Ankara from pressing on with its offensive.

Promoted
Listen to the latest songs, only on JioSaavn.com
"If the regime is entering (Afrin) to oust the PKK, YPG, there is no problem. But if they are entering to protect the YPG, then no one can stop us and Turkish soldiers," he said.