Analysts said the impact of the elections could see Britain's two main political parties face growing pressure to move away from the middle ground to support even more extreme positions on Brexit. 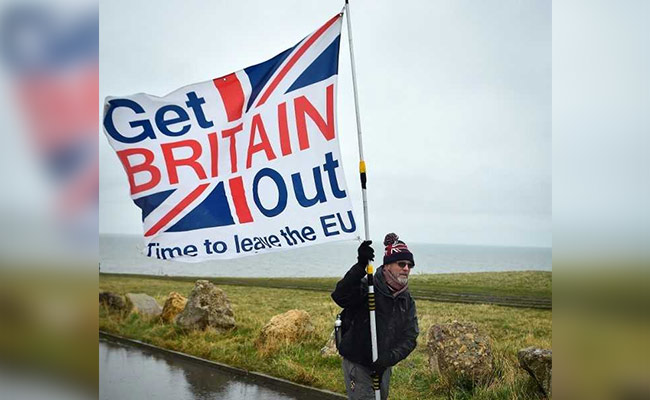 Until recently, Britain was not scheduled to take part in the European elections

Britain's two main parties were punished in the European elections, with results coming in on Monday showing that voters had rejected their handling of Brexit and turned to parties that were unequivocally pro-Brexit or pro-European Union.

Nigel Farage's single-issue Brexit Party was the clear winner of the elections, with the potential to impact the race over who becomes the next British prime minister.

The pro-E.U. Liberal Democrats and the Greens - who also have a simple message on Brexit: stop it - made significant gains as well. Overall, support for all the parties that are unabashedly pro-European was slightly higher than those that are pushing for a hard Brexit.

In other words, Britain is as divided as ever.

Analysts said the impact of the elections could see Britain's two main political parties face growing pressure to move away from the middle ground to support even more extreme positions on Brexit.

In the race to replace Theresa May, who on Friday announced that she would step down as British prime minister, the issue of whether to back a once unthinkable "no-deal" Brexit - like Farage does - is now dominant. At least eight Conservative members of Parliament have publicly declared they will compete for the top job.

Boris Johnson, a Conservative Party lawmaker and the front-runner to become the next prime minister, called the European elections a "crushing rebuke." Writing in his weekly column in the Daily Telegraph, he said: "The message from these results is clear. If we go on like this, we will be fired: dismissed from the job of running the country."

The Conservative Party came in fifth place, winning a paltry 9 percent of the vote. Their dismal showing could see the party shying away from pushing for an early general election, over fears that they could see a similar wipeout.

May tweeted that "very disappointing" results showed the "importance of finding a Brexit deal, and I sincerely hope these results focus minds in Parliament."

If Farage's triumph in these elections pushes the Conservative Party onto his turf, it wouldn't be the first time. The poll-topping performance in the 2014 European elections of the right wing, anti-Europe UKIP - then led by Farage - is thought to be one of the reasons then Prime Minister David Cameron called for the referendum that sent Britain down the whole rocky road of Brexit to begin with.

On Monday, Farage said that if Britain doesn't leave on Oct. 31, the current deadline, then his party would repeat its success in a general election.

"We will contest all 650 seats across the country at the next general election. I will not stop until the job is done," he tweeted.

The opposition Labour Party faced renewed calls to unambiguously back a second Brexit referendum following their poor showing in the elections. They came in third place behind the Liberal Democrats, who saw a surge in support especially in areas that backed "remain" in the 2016 referendum. It did not go unnoticed that the Liberal Democrats topped the poll in Islington, the London constituency of the Labour leader Jeremy Corbyn.

Emily Thornberry, a senior Labour Party politician, told BBC that Labour wasn't clear enough on its position on Brexit and that it needed to learn lessons. Voters, she said, backed parties whose policy "could be summed up in one word or three words."

Jo Swinson, the deputy leader of the Liberal Democrats, whose slogan was "Bollocks to Brexit," said that the results showed that the "growing liberal movement that can stand up to the forces of nationalism and populism" is winning.

It was a bad election for Tommy Robinson, an anti-Islam campaigner who stood as an independent. Robinson, whose real name is Stephen Yaxley-Lennon, received only 2.2 percent of the vote. He reportedly slipped out of the election count early.

Until recently, Britain was not scheduled to take part in the European elections, the second-largest exercise in democracy in the world. But Britain was forced to field candidates after it failed to leave the bloc on March 29 as scheduled.