Recapturing the city and surrounding region has been the goal of a Ukrainian offensive launched in mid-August that forced the Russians back along a broad front. 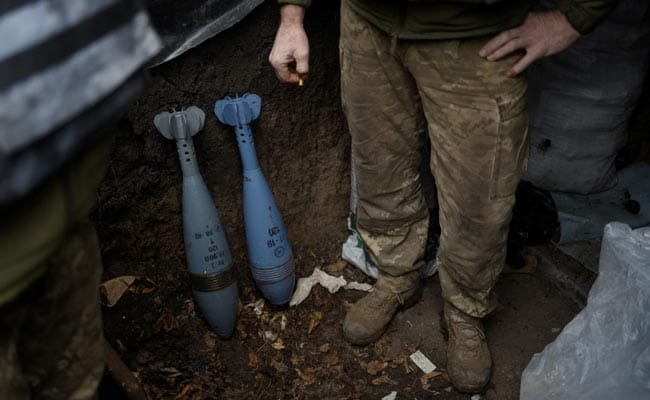 The Ukrainian mortarmen, hands cupping their ears, turned away from the green tube angled towards their Russian foes entrenched less than a kilometre away as one of their comrades hauled on the firing cord.

The crew had expected the flaming blast of a 120 mm fin-tailed cylinder of steel-enclosed high explosive to arc into the grey sky toward a bevy of Russian armoured vehicles. Instead, they got only a dull click.

"It doesn't happen often, but it happens," Hennadyi, 51, muttered to a visiting Reuters reporter on Friday as his crew wrestled the tube off its heavy base plate, turned it upside down and shook the faulty shell onto the leaf-strewn earth.

They carried the dud and a similar round to a storage dugout carved into a muddy trench, picked up two others that they carried back to their weapon and launched in quick succession at Russian positions behind a grain silo.

"We look for the smoke or if something burns," said Yevhen when asked how the crew knew if they had hit their mark.

The men, their mortar hidden in a tangle of trees and bushes whose near-bare branches foretold the coming winter, help secure part of the Ukrainian front line opposite Russian defences north of Kherson, a ship-building city on the west bank of the Dnipro River.

Recapturing the city and surrounding region has been the goal of a Ukrainian offensive launched in mid-August that forced the Russians back along a broad front.

Last month, many Ukrainian units, including the mortar crew, dug into vast trench networks in adjacent Mykolaiv province as other Ukrainian forces pressed the drive from northeastern portions of the front.

But Kyiv says the offensive has been slowed by the flat terrain of sweeping fields that provide little cover but for overgrown irrigation ditches and tree lines. Progress, it says, is also being slowed by recent rains that have muddied the trenches and the dirt tracks that cut across the region.

The sides exchanged mortar, artillery and rocket fire on Friday, a daily ritual of the trench warfare being fought in the fields that sweep along Mykolaiv's border with Kherson.

Even before the mortarmen loaded their tube, a column of black smoke drifted skyward from behind the grain silo that Hennadyi said the Russians used as cover and an observation post.

Ukrainian gunners avoid hitting the silo, the highest structure for kilometres around, because of its importance to the region's farmers, he said.

"We're not hitting it, but we don't have enough shells. For every one shell that we send, they send back five," he said. "They shoot at us most of the time."

At one point, seven rapid detonations echoed over the trenches whose lips are covered with black garbage bags to prevent them being eroded by rain.

Lieutenant Oleh Zelinskyi, a Ukrainian officer who accompanied the Reuters team, said the blasts were from a cluster munition that may have been intended for the team.

The Russians, he said, fired the bomblet-bearing missile into a devastated village into which they had seen the team's two vehicles drive before they motored on to the mortar position.

Zelinskiy said he had radioed the command post in the village when the convoy arrived.

"My friends replied, 'We know because we have a Russian radio intercept in which they said one of their drones detected two little boxes coming into the village,'" Zelinskyi added. "They thought we were still there when they fired."