French and Danish ferry companies would allow 4,000 more lorries a week to use other ports on England's south coast to prevent a bottleneck at Dover. 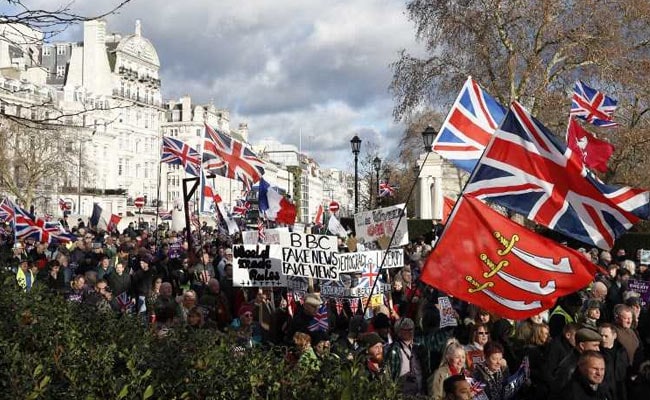 The additional services will provide up to half a million tonnes a month in extra capacity.

Britain has spent more than 100 million euros on chartering ferries to mitigate the risk of "severe congestion" at the port of Dover in the event of a no-deal Brexit, according to government documents.

The government has struck deals worth 107.7 million ($137 million, 117 million euros) with British, French and Danish ferry companies that would allow for almost 4,000 more lorries a week to use other ports on England's south coast to prevent a bottleneck at Dover, it added.

"This significant extra capacity is a small but important element of the Department for Transport's (DfT) no-deal Brexit planning," said a spokesman for the department.

"The department is helping ensure the rest of government are fully prepared for a range of scenarios, including a particular focus on a potential no-deal and to mitigate the impact of any Brexit outcome on all transport modes."

The DfT has signed contracts with French firm Brittany Ferries, Danish company DFDS and Britain's Seaborne, saying the awards were "a small but important element" of its no-deal planning.

The additional services will provide up to half a million tonnes a month in extra capacity, which the government hopes will mitigate the extra time needed to perform customs checks on incoming and outgoing freight.

"The government has the power to stop "no deal" at any time but instead is spending millions on last minute contracts," he said.

The department also warned that increased border checks could "cause delivery of critical goods to be delayed", and "significant wider disruption to the UK economy".

British Prime Minster Theresa May secured an agreement with European Union leaders on Nov 25 that would see Britain leave the bloc on March 29 with continued close trade ties, but the odds look stacked against her getting it through a deeply divided British parliament.

The deal has been criticised from among May's Conservative lawmakers by supporters of a cleaner break with the EU and those who want to keep closer ties.