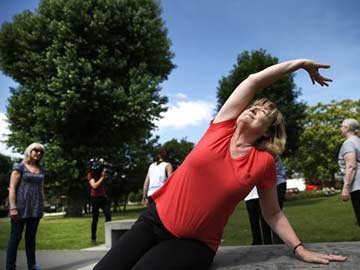 On this Tuesday, June 17, 2014 photo, Karen Edwards participates at a parkour class for elderly people at a park in south London.

London: On a recent morning in London, Lara Thomson practiced spinning on benches, swinging from metal bars and balancing off raised ledges - all elements of a daredevil discipline known as "parkour."

What was unusual about the scene is that Thomson is 79 and all of her classmates are over 60.

They are members of a unique weekly class for seniors in a sport more commonly known for gravity-defying jumps than helping people with arthritis.

Invented in the 1980s in France, parkour is a sport usually favoured by extremely nimble people who move freely through any terrain using their own strength and flexibility, often using urban environments such as benches, buildings and walls as a type of obstacle course. It's also known as free running.

The London parkour class of about a dozen students is taught by two instructors who have adapted the sport's main elements to a level that can be handled even by those over 60 who have replacement joints or other medical conditions.

"I wondered whether it was a government plot to get rid of old people when I heard about the class," Thomson joked. She said she has balance problems and that the class helps her feel more confident about getting around. "Being able to get outside and do silly things like hugging trees is great," she said, referring to a stretching exercise.

While most fitness classes aimed at seniors focus on calmer activities such as dance or yoga, experts say parkour is a reasonable, if unorthodox, option.

"When I first heard about this, I had a picture in my mind of elderly people jumping off of walls and I thought there was no way this could be appropriate," said Bruce Paton, a physical therapist who works with the elderly at the Institute of Sport, Exercise and Health at University College London. He is not connected to the programme. "But when you look at the things they're doing, it's actually quite gentle and could increase their strength and flexibility to help them with their daily activities."

Still, Paton said parkour could potentially be dangerous for people with serious heart problems and warned anyone with a joint replacement or muscle weakness should be careful.

The parkour instructors said everyone who takes the class fills out a health form and they are particularly careful to dissuade participants from doing too much; several students have artificial joints, arthritis or a pacemaker.

"Every single technique in parkour can be changed so that anyone can do it," said Jade Shaw, artistic director of Parkour Dance, who teaches the class. The parkour sessions initially began as a pilot project last year and Shaw is hoping to get more funding to expand it further. For now, the classes are free and held at a Tibetan Buddhist centre in South London.

"I think it's very beneficial and I'm hoping we'll soon have a lot more older people bouncing around the parks," she said.

David Terrace, a health and fitness expert for the charity Age U.K., said any efforts to get older people more active should be welcomed. He said adaptations have been made to other sports to help the elderly exercise more, such as turning soccer into walking soccer and building customized boats to accommodate wheelchairs for sailing.

"There's no age limit for exercise, it's just about the individual and what they feel comfortable doing," he said.

At 85, George Jackson is the oldest participant in the London parkour class.

Promoted
Listen to the latest songs, only on JioSaavn.com
"I really enjoy it and wish I could do more," said Jackson, an army veteran and former boxer. "I just sometimes forget how old I am and that I can't do certain things."

He said he struggles with a swollen ankle and knee but that the class has helped. "I was limping around before and now I can walk straight," Jackson said. "But I still don't plan to jump off of anything higher than a bench."