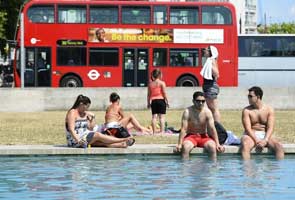 London: Britain's first prolonged heat wave in seven years has taken the country by surprise, with rails buckling, shops selling out of electric fans, and scientists estimating the surge in temperature could have caused hundreds of premature deaths.

After a washout summer in 2012 and the coldest spring for over 50 years, temperatures have soared across the country due to a northward shift in the high-altitude jetstream, prompting several authorities to issue public warnings over the heat.

Figures released by the London School of Hygiene and Tropical Medicine on Thursday estimated about 650 people may have died prematurely due to the heat over the past nine days, producing data based on deaths during previous heat waves.

"The excess is likely to have been overwhelmingly among the elderly, especially those over 75, some of which may have been among people who would have died just a few weeks later if there had been no heat wave," Ben Armstrong, an epidemiological statistician, told Reuters.

The research followed warnings from police about taking excessive risks to escape the heat after four people died in separate incidents on Wednesday.

A 16-year-old boy and 41-year-old man were found dead in unrelated incidents in lakes in the eastern county of Norfolk while in Cornwall, a 40-year-old woman died swimming in the sea. In the central city of Lincoln a postman died after collapsing in the heat during his round.

"The only bad thing about the heat wave is travelling when the tube is busy. It's so hot," said one commuter sunbathing in a park at Canary Wharf in London's docklands.

Britain's national weather service, the Met Office, said Britain reached its highest temperature of 2013 on Wednesday, with 32.2C (89.9F) recorded at Hampton, southwest of London, and forecasters are expecting the mercury to rise over coming days.

July is also expected to become the driest July since records began in 1766 and may beat the record set in 1955 when only one inch (30mm) of rain fell.

"We have had 9mm of rain in the UK and 4mm in England - that is well below the average for the time of year. Although it is too early to say definitely, we could be looking at the driest July on record," a Met Office spokeswoman said.

The heat has proved a boon to coastal resorts as Britons rush to the beach to cool down.

Promoted
Listen to the latest songs, only on JioSaavn.com
But although shops and hotels are enjoying the increase in trade, one Tesco supermarket in the popular Cornish surfing resort of Newquay has felt forced to act to preserve decency by insisting its swimwear-clad customers cover up before entering.

"In stores such as this one which are close to the beach, we ask that customers wear a T-shirt and shoes," said a spokesman in a statement e-mailed to Reuters. "We want all our customers to feel comfortable when shopping."
© Thomson Reuters 2013