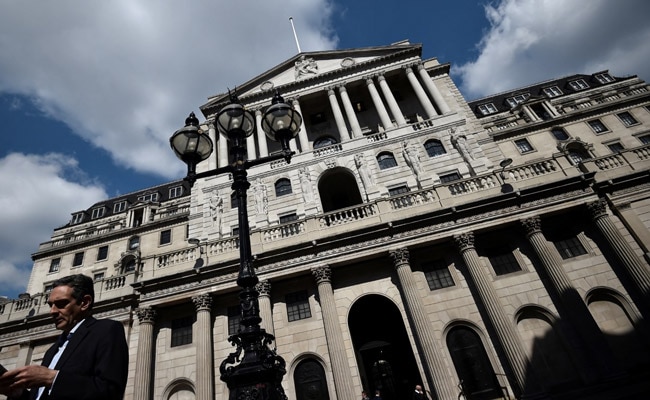 The BoE said British inflation would peak at 10.9 percent this year.

The Bank of England on Thursday announced its biggest interest rate hike since 1989 to combat sky-high inflation that it warned was pushing Britain into a recession set to last until mid-2024.

Following a regular meeting, the BoE said it was lifting borrowing costs by 0.75 percentage points to three percent -- the highest level since the 2008 global financial crisis -- to cool UK inflation that it sees shortly peaking at a four-decade high near 11 percent.

"It is a tough road ahead," BoE governor Andrew Bailey told a press conference.

"The sharp increase in energy prices caused by Russia's invasion of Ukraine has made us poorer as a nation. The level of economic activity is likely to be flat and even fall for some time," he warned.

On Wednesday, the US Federal Reserve sprang a fourth consecutive hike of 0.75 percentage points -- and its boss Jerome Powell suggested they would go higher than expected.

The BoE said British inflation would peak at 10.9 percent this year, but with the level so high, analysts said the central bank rate could hit as high as five percent in the coming months.

Minutes of its meeting warned of a "challenging outlook for the UK economy" that was "expected to be in recession for a prolonged period", dealing a blow to Britain's troubled government.

The BoE said the economy had shrunk since the third quarter, entering a technical recession that is forecast to last until the first half of 2024.

The pound tumbled two percent against the dollar on expectations of a long-lasting recession.

"A typical textbook trade is out of the window because currencies usually move higher when a central bank increases rates," noted Naeem Aslam, chief market analyst at Avatrade.

"Tough times are ahead, and we are going to see the economy, markets, and the currency tanking in the coming months."

The BoE rate increase is set to worsen a cost-of-living crisis for millions of Britons as hikes by central banks see retail lenders push up interest rates on their own loans.

"The central bank has had the unenviable job of fighting soaring inflation amid enormous economic and political uncertainty," said Craig Erlam, analyst at trading platform OANDA.

Repayments on UK mortgages have surged in recent weeks also after the debt-fuelled budget of previous British prime minister Liz Truss spooked markets, forcing her to resign and triggering emergency buying of UK government bonds by the BoE.

Her successor Rishi Sunak has attempted to bring calm to markets by hinting at tax rises in a fresh budget on November 17, even if such a move further harms Britain's economy.

"I think everyone knows we do face a challenging economic outlook and difficult decisions will need to be made," Sunak, a former UK finance minister, told parliament on Wednesday.

As the Covid-19 pandemic began in early 2020, the BoE slashed its key interest rate to a record-low 0.1 percent and also pumped massive sums of new cash into the economy.

The Bank of England started raising rates last December, while Thursday's hike was the eighth increase in a row.

"Importantly, most of the tightening in policy over the past year was yet to feed through to the real economy," said the BoE minutes.