Ugandan president on gays: 'you can get worms' 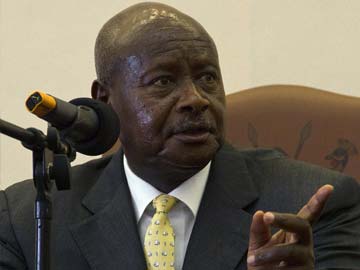 Uganda’s President H.E Yoweri Museveni speaks after he signed the Anti-Homosexuality Bill on February 24, 2014 in Entebbe.

Entebbe, Uganda: The mouth is made for eating and kissing, and gay oral sex will give you worms: Ugandan President Yoweri Museveni on Monday gave a detailed explanation of why he believed homosexuals should be jailed for life.

"I have failed to understand that you can fail to be attracted to all these beautiful women and be attracted to a man," the president told reporters as he signed off on controversial anti-gay legislation that includes life prison terms for repeat offenders.

"That is a really serious matter. There is something really wrong with you," he said.

Museveni, a devout evangelical Christian, said the only explanation for being gay was money.

"Homosexuals are actually mercenaries. They are heterosexual people but because of money they say they are homosexuals. These are prostitutes because of money," he said, asserting that he had taken the time to get scientific advice before signing off on the law.

"No study has shown you can be homosexual by nature," he said. "That man can choose to love a man... is a matter of choice. After listening to the scientists, I got the facts.

"Can somebody be homosexual simply by nature? The answer is no."

The president said he had a particular problem with oral sex.

As for gay oral sex, he said the health risks were appalling.

"It is not healthy. You can contract STD (sexually transmitted diseases). You push the mouth there, you can come back with worms and they enter your stomach because that is a wrong address. You can also contract Hepatitis B," he said.

He said homosexuality in Uganda has been "provoked by the arrogant and careless Western groups that are coming in our schools and recruiting homosexuals into homosexuality and lesbianism".

"Initially I have not paid attention to it because I was busy with the immediate issues of defence, security, electricity, the roads," the president said.

"When finally, when I concentrated my mind on it, I distilled three problems: number one, those who are promoting homosexuality and recruiting normal people to it. Secondly, as a consequence of number one, many of those recruited, are doing so for mercenary reasons. To get money. In effect, homosexual prostitutes. These mercenary homosexual prostitutes have to be punished. Just like those who are recruiting them," he explained.

"Number three, homosexuals exhibiting themselves. Exhibition of homosexuals, advertising yourself that you are homosexual."

Museveni warned critics of the law not to push the country on the matter.

Promoted
Listen to the latest songs, only on JioSaavn.com
"I advise friends from the West not to make this an issue because if they make it an issue the more they will lose," he said. "This is social imperialism. To impose social values of one group on our society.

"I would advise Western countries, this is a no-go area," he said. "I don't mind being in a collision course with the West. I am prepared."