The outbreak has claimed 55 lives out of 141 cases according to Ugandan authorities, who have imposed lockdowns in Mubende and Kassanda. 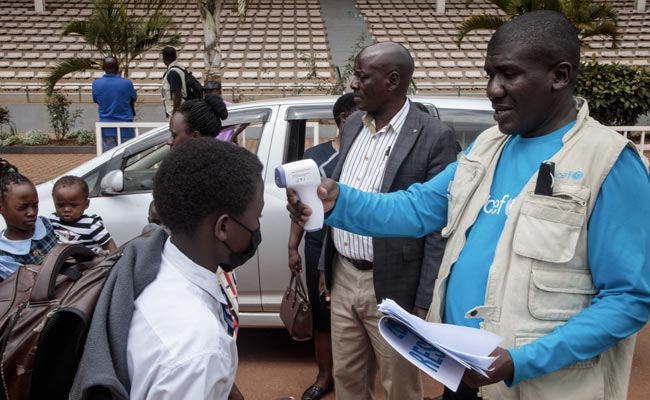 A student gets his temperature checked before riding a chartered bus in Kampala. (File)

Uganda closed schools nationwide on Friday to curb the spread of Ebola, despite the health minister insisting to AFP that new cases had declined.

The directive to close schools two weeks before the end of term was announced earlier this month following the deaths of eight children from the highly contagious disease.

But in recent weeks, the number of new infections registered in the capital Kampala and the epicentres of Mubende and Kassanda has declined, Health Minister Jane Ruth Aceng told AFP.

"The major breakthrough in this fight against Ebola for Uganda is that the communities have realised that Ebola is deadly and it kills," she said.

"We encourage the population to remain alert and cooperate with the health teams if we are to win this battle and there are signs Uganda is winning," she added.

Uganda's WHO office said Thursday that as of November 22, no case had been declared for nine days in Kamapala, 10 days in Mubende and 12 days in Kassanda.

The outbreak has claimed 55 lives out of 141 cases according to Ugandan authorities, who have imposed lockdowns in Mubende and Kassanda.

The measures include a dusk-to-dawn curfew, a ban on personal travel and the closure of markets, bars and churches.

At a school in Kampala, one parent told AFP he was relieved to take his child home.

"I think this early closure was really necessary, because of the situation, the Ebola situation in the country," said banker Joab Baryayaka.

"We trust they are safer with us than staying at school, where we cannot guarantee the situation."

Since the outbreak was declared in Mubende on September 20, the disease has spread across the East African nation.

According to WHO criteria, an outbreak of the disease ends when there are no new cases for 42 consecutive days -- twice the incubation period of the disease.

The strain now circulating is known as the Sudan Ebola virus, for which there is no vaccine, although several would-be jabs are heading towards clinical trials.

Outbreaks are difficult to contain, especially in urban environments.